Purpose: Ubiquitin specific peptidase 5 (USP5) has been reported to promote the progression of several malignant tumors. It may affect cancer development via modulating cell cycle and colony formation. In pancreatic cancer, the biological function of USP5, especially in migration and invasion remains unclear.

Methods: USP5 protein expression levels in primary pancreatic cancer and lymph node metastasis tissues were detected using immunohistochemistry (IHC). χ2 test, Kaplan-Meier analysis, univariate and multivariate analyses were used to evaluate the relationship between USP5 expression and clinicopathological feature. RT-qPCR were carried out to quantitate the mRNA expression levels of USP5 in pancreatic cancer cell lines. CCK8 and Colony formation assay were performed to prove how USP5 works in proliferation. Evaluation of tumor metastasis was made by Transwell and wound healing assay. EMT and STAT3 signaling related markers were detected by western blot.

Conclusions: The results suggest that USP5 is highly expressed and might have clinical significance for pancreatic cancer patients. High USP5 expression promotes both progression and metastasis by activating STAT3 signaling. Thus, USP5 might be a potential target in pancreatic cancer treatment.

Pancreatic cancer is an aggressive tumor with higher malignancy and higher mortality rates. Accounting for, 80% of all cases were found distant metastasis at the time of diagnosis [1, 2]. Therefore, it will be meaningful to screen biomarkers and find targeted therapies for pancreatic cancer.

Ubiquitination is a major mechanism in post-translational modification of protein. Deubiquitinating enzymes (DUBs) regulate protein degradation by deubiquitinating the substrate protein [3]. Accumulating evidence has confirmed that ubiquitin-specific proteases (USPs), as an important family of DUBs, have been involved in tumorigenesis and malignancy by regulating other proteins. USP5 is one of the important members of USP family. USP5 have been reported as an oncoprotein in diverse cancers including myeloma [4], non-small cell lung cancer [5], hepatocellular carcinoma [6], colorectal cancer [7], ovarian cancer [8] and pancreatic cancer [9]. USP5 have been studied in the development of pancreatic cancer [9, 10]. However, the role of USP5 in pancreatic cancer still needs to be studied.

Inclusion criteria of patients was described as follows, (1) Patients underwent surgery and following treatment at Harbin Medical University Cancer Hospital from December 2003 to June 2010 with pathologically confirmed pancreatic cancer. (2) All patients signed informed consent. (3) Patients with adequate pathological tissue. Among them, 11 patients contained primary tumor tissues and its corresponding lymph node metastasis tissue samples. We excluded patients who did not sign the informed consent or with no enough tumor tissue samples. The samples were stored at -80 °C before paraffin-embedded. This study was approved by the Ethics Committee of Harbin Medical University Cancer Hospital. The clinical pathological features of patients were extracted from medical records.

The expression of USP5 in pancreatic cancer tissues was detected using IHC. The sections were processed for immunohistochemical staining as previously reported [11]. The 4-μm-thick sections were deparaffinized before heated in citrate buffer (0.01 M). Then they were incubated with 0.3% H2O2 and rehydrated. After blocking, the sections were incubated with anti-USP5 (1:100 Proteintech Wuhan Sanying, Wuhan, China) antibody at 4 °C overnight. After washing several times in phosphate buffered saline (PBS), the sections were incubated in the biotinylated secondary antibodies. After that, the slides were washed in PBS again, exposed to diaminobenzidine, and counterstained with hematoxylin. After serial dehydration, the slides were mounted under a coverslip for microscopic examination. As for blank control and negative control, the slides were incubated with PBS and omitting the primary antibody, respectively. The intensity of USP5 staining was scored as 0 (no signal), 1 (weak), 2 (moderate), and 3 (marked). Percentage score was assigned as 1 (0-25%); 2 (26-50%); 3 (51-75%); and 4 (76-100%). The scores of each tumor sample were multiplied to give a final score of 0-14. Two pathologists were asked to evaluate and record the IHC results in all cases independently, without prior knowledge of the clinical data. With a critical value of 9, we divided the expression to low expression (<9) and positive expression (≥9).

Total RNA was extracted by using the Trizol reagent (Thermo fisher Scientific, Waltham, MA, USA), and the reverse-transcription reactions were performed by using an M-MLV Reverse Transcriptase kit (Invitrogen, Carlsbad, CA, USA). To find out mRNA levels of USP5 and β-actin, RT-qPCR was performed by using a standard SYBR Green PCR kit (Toyobo Life Science, Shanghai, China), according to the manufacturer's instructions. The primers were as follows:

Panc1 and AsPC1 cells were treated with siRNAs and overexpression plasmids. The next day, cells were seeded at a density of 1000 cells per well in 96 well plates. Forty-eight hours later, 10 μL of Cell Counting Kit-8 reagent (Dojindo, Kumamoto, Japan) was added into each well, and cultured for 1 hour at 37 °C in the dark, according to the manufacturer's instruction. The absorbance of each well was measured at 450 nm every day for the next 3 days.

As for invasion assays, Panc1 cells (1×105 cells/well) and AsPC1 cells (1×105 cells/well) were added into top chamber of Transwell inserts coated with 40 μL Matrigel (1:15,Corning, NY, USA). The bottom chamber was filled with 750μL of medium containing with 10% FBS, while the top chamber was filled with 500 μL of pure medium. After cultured at 37 °C for 24 hours, the chamber was washed in PBS and fixed in 4% paraformaldehyde for twenty minutes. After that, it was stained with crystal violet staining solution (Beyotime, Shanghai, China) and taken pictures under a microscope. The counting was analyzed and quantified via ImageJ (National Institutes of Health).

Panc1 cells (4×104 cells/well) and AsPC1 cells (3×104 cells/well) with different treatments were seeded into scratch chamber. The chamber was moved the next day and taken pictures under the microscope (0 h, 24 h).

Transwell inserts without Matrigel was used as migration assay.

GEPIA and ICGC databases were used to validate our experimental results. GEPIA directly showed the differential expression of USP5 in pancreatic cancer and normal tissues. As for ICGC, we downloaded and re-analyzed USP5 expression and its correlation with clinical prognosis.

All the results were presented as the mean ± standard using GraphPad prism 7.0 (GraphPad Software, USA) and SPSS statistical software 18.0 (IBM Corp., Armonk, NY, USA). Χ2 test was used to analyze the relationship between USP5 expression and other clinicopathological features. The Cox proportional hazard model was generated for univariate and multivariate regression analysis to identify prognostic factors. Kaplan-Meier survival curves were constructed using a logrank test. Pearson correlation coefficient analysis was conducted to test for correlation between two quantitative measurements. One-way analysis of variance (ANOVA) and Tukey's posttest were used to compare multiple groups of data. P-value < 0.05 was considered statistically significant; for all results * denotes P < 0.05; ** P < 0.01 and *** P < 0.001. Each experiment was performed with at least three independent experiments.

Association between USP5 and the clinicopathological features in pancreatic cancer patients

To identify the regulatory roles of USP5, USP5 protein levels were tested in 94 pancreatic cancer patients by IHC. Among the samples, 61 patients had high expression of USP5 in tumor tissues (details shown in Table 1). The results showed that USP5 expression level is related to tumor differentiation, CEA and CA19-9 levels (P< 0.05).

USP5 overexpression promotes the progression and metastasis of pancreatic cancer

USP5 knockdown inhibits the progression and metastasis of pancreatic cancer

To further identify the role of USP5 in pancreatic cancer, we knockdown the expression of USP5 in AsPC1 cells by shRNA. Cell morphology was observed under microscope (Fig. 4A). The cell viability assay and colony formation assay revealed that cell proliferation was significantly inhibited in USP5 knockdown cells (Fig. 4B-C). In contrast with USP5 overexpression, knockdown USP5 inhibited cell invasion and migration (Fig. 4D-G). Taken together, these results suggested that USP5 could evidently promote pancreatic cancer cells proliferation and metastasis. 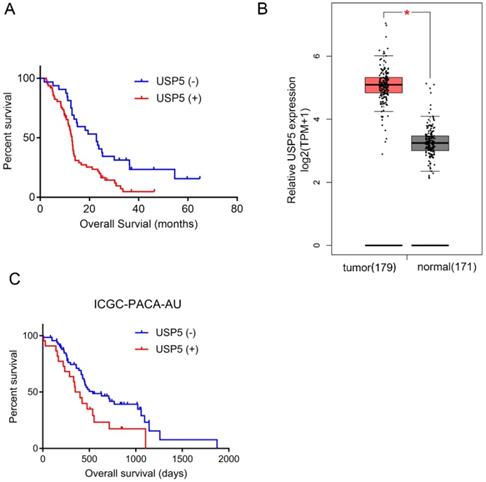 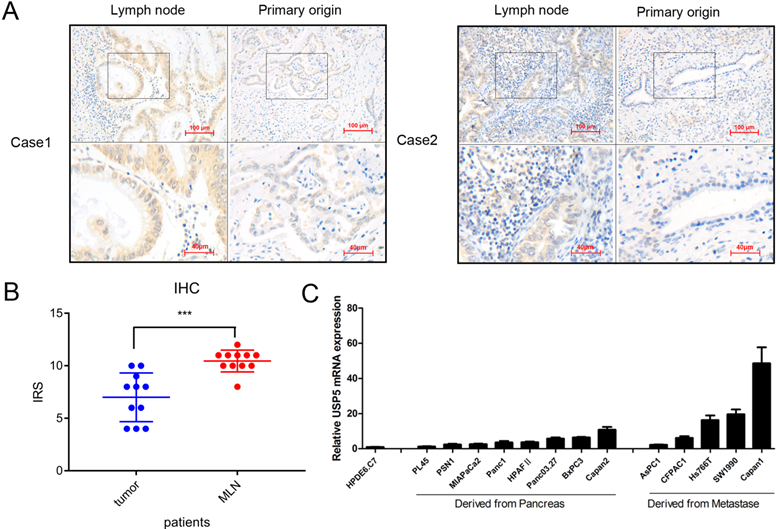 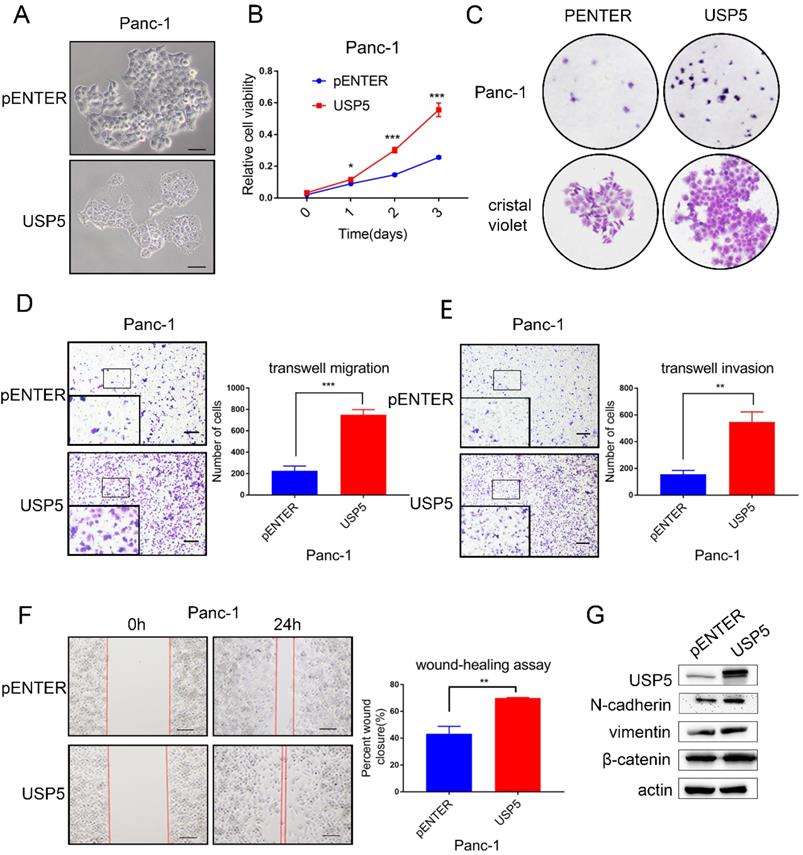 STAT3 is often overexpressed or overactivated in several tumors [12]. A recent study also reported that the ubiquitin ligase Fbw7 induced STAT3 ubiquitination for degradation in diffuse large B-cell lymphoma [13]. However, the effect of USP5 in STAT3 signaling was still unclear. In this study, we found that STAT3 was overactivated, along with the upregulation of USP5 (Fig. 5A). In contrast, knockdown of USP5 suppressed the activation of STAT3 (Fig. 5B). 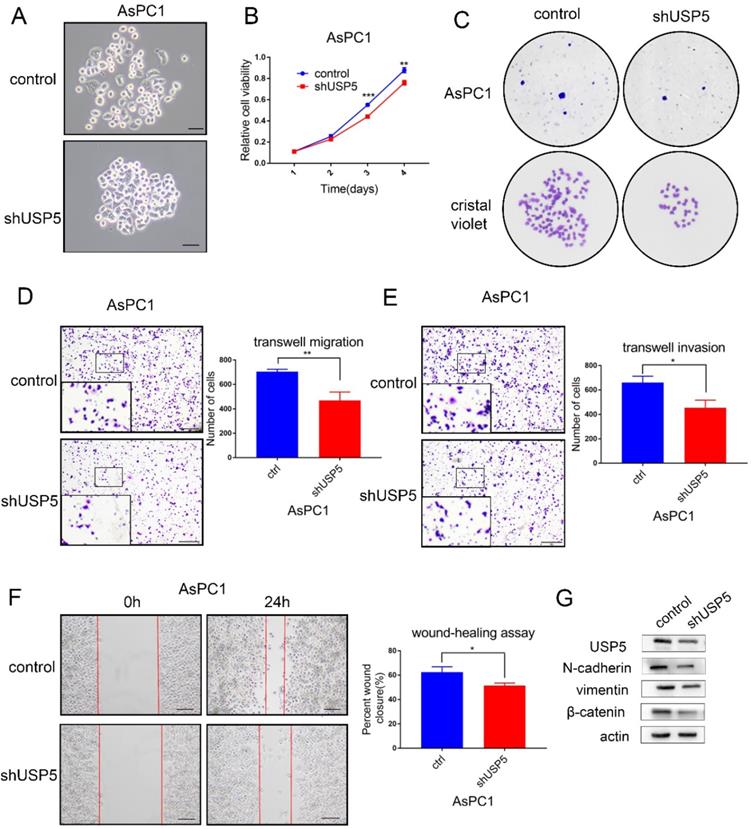 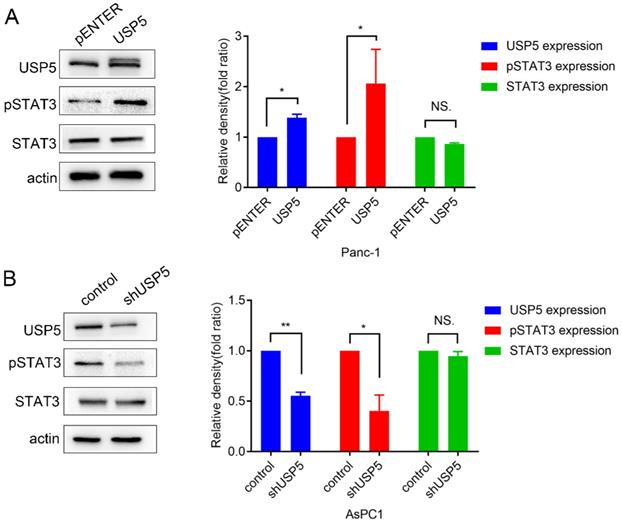 Recently, there have been several reports on how USP5 promote the growth of cancer. By stabilizing Tu translation elongation factor, USP5 could regulate colorectal cancer cell growth [7]. Moreover, USP5 stabilized FoxM1 protein in pancreatic ductal adenocarcinoma and regulated cell proliferation via FoxM1 proteins [9]. This has been confirmed in our experiments.

In previous study, USP5 was found promoting EMT by stabilizing SLUG in hepatocellular carcinoma [6]. In our study, we reported that the expression of USP5 is higher in metastasis than in primary tumor. This was confirmed in clinical patient samples and pancreatic cancer cell lines, respectively. To further investigate how USP5 affect pancreatic cancer migration and invasion, we overexpressed USP5 in Panc1 cells and knockdown USP5 in AsPC1 cells. Results elucidated that USP5 contribute to cell invasion and metastasis in pancreatic cancer.

The effect of USP5 in progression and migration in pancreatic cancer has been confirmed, but its mechanism was still unknown. In this study, we confirmed that USP5 mediated STAT3 signaling. The signal transducer and activator of transcription 3 (STAT3) is an important signaling mediator, which plays significant roles in a vast array of biological processes [26-28]. It has been confirmed that overexpression or overactivation of STAT3 is required for tumorigenesis and metastasis. Thus, USP5 may promote pancreatic cancer progression and metastasis through enhancing STAT3 signaling.

Small molecules inhibitor WP1130 [29] and Chinese medicine Formononetin [6] were reported to inhibit USP5, which further indicated that targeting USP5 might be an effective strategy in pancreatic cancer treatment.

This study is funded by following foundations:

For the use of these clinical materials for research purposes, prior patient consent and approval was obtained from the Institutional Research Ethics Committee of Harbin Medical University Cancer Hospital. The number of ethical approvals is KY2018-12.