Glioma is a pervasive malignancy and the main cause of cancer-related deaths worldwide [1]. Glioblastoma multiforme (GBM), WHO Ⅳ grade glioma, is characterized by the presence of poorly differentiated stromal cells around focal necrosis and capillary proliferation [2, 3]. The latest statistics shows that GBM accounts for 12%~15% of all intracranial malignant tumors and 50%~60% of astrocytic tumors [4]. Current systematic treatment strategies for glioma include surgery, chemotherapy, radiotherapy and tumor treating fields (TTF) and have introduced certain innovations; however, GBM grows rapidly, has a poor prognosis, and usually results in death within one year after diagnosis [5]. Therefore, investigation of the molecular mechanisms of glioma occurrence and progression is very important.

Circular RNA (circRNA) is a specific type of RNA molecule and has been extensively investigated in the fields of RNA and disease research [6]. CircRNA molecules differ from linear RNA (with 5' and 3' ends) and have a closed circular structure, which is not affected by RNA enzymes [7, 8]. From the cell biology point of view, circRNAs are closely related to the biological functions of cells, such as proliferation, differentiation, and apoptosis [9, 10]. Recent studies have shown that circRNAs play an important regulatory role in the growth and development of organisms and occurrence and development of diseases [11, 12]. CircRNAs has attracted attention of the scientists in the field of cancer research. Numerous recent studies have suggested that circRNAs play an important role in tumor progression, and certain circRNAs can even be used as targets for early diagnosis, prognosis assessment and targeted therapy of tumors. For example, circ-ZKSCAN1 has been reported as a prognostic factor of bladder cancer recurrence [13]; circ-UMAD1 in peripheral circulation may be a biomarker of lymph node metastasis in thyroid cancer [14]; hsa_circ_0003829 may act as a diagnostic predictor in oral squamous cell carcinoma [15]. In glioma, accumulating evidence indicates that circRNAs are closely associated with glioma progression [1, 16, 17]; however, progress of the sequencing technology resulted in identification of additional circRNAs, and the relationships between circRNAs and glioma progression require further investigation.

Glioma and corresponding adjacent nonneoplastic tissue samples (n=20) were obtained from patients diagnosed with glioma and admitted to the People's Hospital of Xuancheng City from June 2014 to September 2018. The samples were stored in liquid nitrogen immediately after resection. The pathological grade of the tumors was independently determined by two senior pathologists. Written informed consent was obtained from all patients. This study was approved by the Ethics Committee of People's Hospital of Xuancheng City.

Glioma cell lines (U138, U87, U251, A172, and T98G) were obtained from the American Type Culture Collection (ATCC, MD, USA). Normal astrocytes were purchased from Procell (Wuhan, China). All cell lines were grown in Dulbecco's modified Eagle's medium (DMEM, Gibco, NY, USA) containing 10% fetal bovine serum (FBS, HyClone, UT, USA) and maintained at 5%CO2 and 37°C. The synthetic nucleotides and constructs used in this study were provided by GenePharma (Shanghai, China), and the transfection was performed using Lipofectamine 3000 (Invitrogen, CA, USA).

Total RNA was isolated from the cells or tissues by using TRIzol reagent (Invitrogen, CA, USA). Qualified RNA was reverse transcribed into complementary deoxyribonucleic acid (cDNA) using a PrimeScript RT kit (Invitrogen, CA, USA); qRT-PCR was performed using SYBR® Premix Ex Taq™ (TaKaRa, Tokyo, Japan) at 92°C for 10 min and 40 cycles at 92°C for 10 s and 60°C for 1 min. GAPDH was used as an internal control. The relative level of circ_0091581, miR-1243-5p, and RMI1 was calculated by the 2-ΔΔCt method. The primers used in this study were shown in Table 1.

The primers used in this study.

Isolated RNA (2 µg) was incubated with RNase R (3 U/µg) or digestion buffer at 37°C for 30 min. After the solution was purified, qPCR was performed to determine the RNA levels.

Glioma cells were incubated with actinomycin D (3 µg/ml, Sigma, CA, USA) to block the transcription of mRNAs for 0 h, 8 h, 16 h, and 24 h. After cells were harvested, circular GPC3 (hsa_circ_0091581) and linear GPC3 RNAs were quantified by qRT-PCR to determine the half-life of RNA.

Total protein was isolated by using RIPA lysis buffer (Keygene, Shanghai, China). After separation by SDS-PAGE, the proteins were transferred to PVDF membranes (Millipore, MA, USA). Then, the membrane was incubated with primary and secondary antibodies (Proteintech, IL, USA). Finally, the signals were detected by an Image Quant LAS 4000 system (GE, USA).

RIP assay was performed using a Magna RIP RNA-binding protein immunoprecipitation kit (Millipore, MA, USA). The treated U87 and U251 cells were lysed in a lysis buffer containing protease and RNase inhibitors. Then, the cell lysates were incubated in a RIP buffer with magnetic beads conjugated with an anti-human Ago2 antibody (Millipore), and normal IgG (Millipore) were used as a negative control. Finally, the coprecipitated RNAs were eluted from the beads and assayed by qRT-PCR.

Cells (40,000/well) were suspended in DMEM without FBS and added to the upper section of a transwell chamber (8 µm; Millipore, MA, USA). DMEM containing FBS (10%) (600 µl) was added to the bottom of a 24-well plate with inserts. After culture for 48 h, the cells migrated or invaded to the bottom chamber were fixed and stained. In invasion assay, the chambers were precoated with Matrigel (200 mg/ml, BD, NJ, USA), and in migration assay, the precoating was not performed.

The data are presented as the mean ± standard error and were analyzed by SPSS (Statistical Product and Service Solutions, Version 17.0, IL, USA). Figures were edited using GraphPad Prism (Version X; CA, USA). Two-paired independent t-test was performed to assess the differences between the groups. Differences were considered significant at P< 0.05.

The expression and characteristics of hsa_circ_0091581 in glioma

Hsa_ circ_0091581 promotes the proliferation, migration, and invasion of glioma cells in vitro

Hsa_ circ_0091581 regulates the proliferation, migration, and invasion of glioma cells in a miR-1243-5p-dependent manner 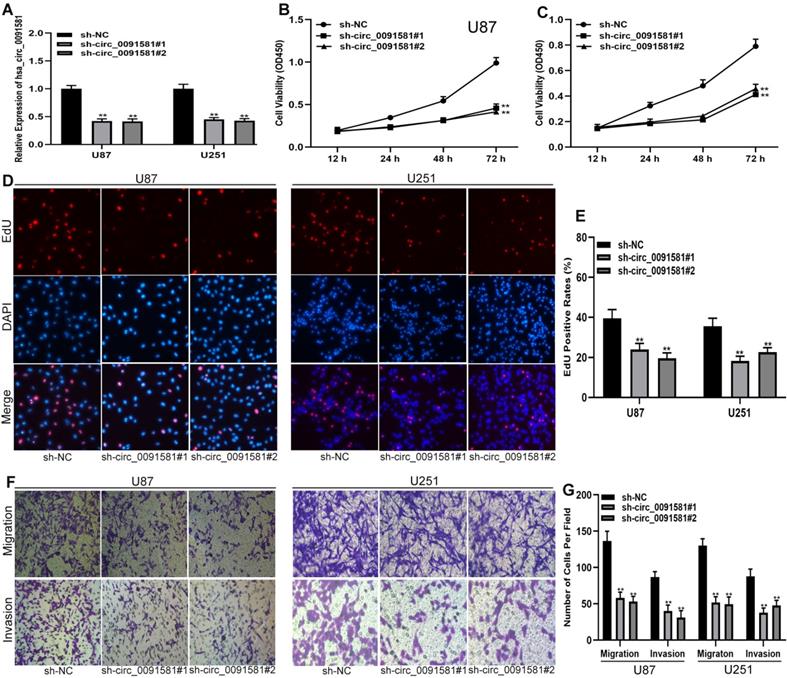 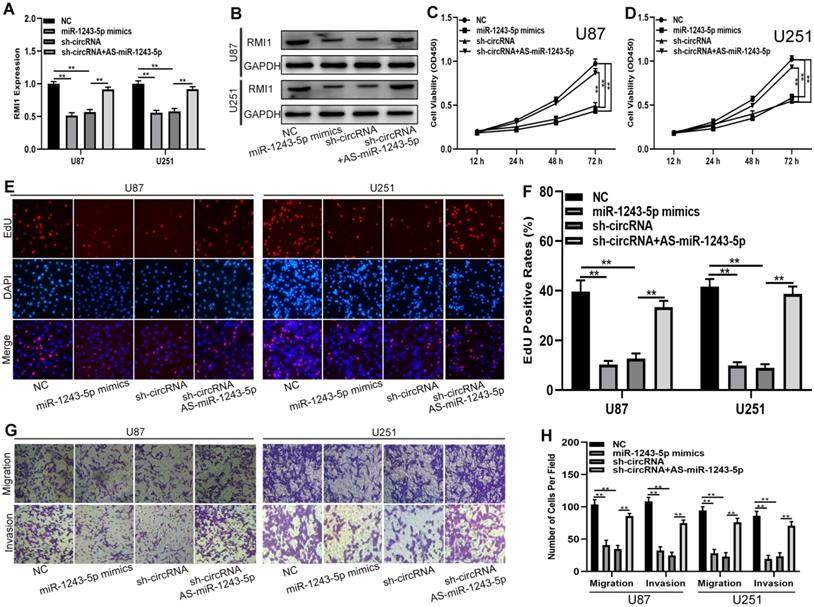 Glioma has always been an important subject of research and a challenge for neurosurgery [20, 21]. At present, the treatment of glioma mainly includes surgical resection followed by adjuvant radiotherapy and chemotherapy [22]. Recently, a variety of new treatment methods of glioma have emerged and are used in clinic to improve the prognosis of patients to an extent; however, the median survival time of glioma patients has not improved significantly[23]. Thus, investigation of the molecular mechanisms of glioma pathogenesis and progression is important. Rapid development of next generation sequencing (NGS) technology results in detection of an increasing number of noncoding RNAs (ncRNAs) and especially circRNAs [24]. circRNAs play an important role in the development of human diseases. For example, hsa_circ_0026416 acts as an oncogene in colorectal cancer [25]; circCFL1 can promote the progression of diffuse large B-cell lymphoma [26]; and hsa_circ_0001068 can be a novel biomarker of ovarian cancer [27]. Hsa_circ_0091581 is a novel circRNA transcribed from the glypican-3 gene (GPC3). hsa_circ_0091581 plays an oncogenic role in hepatocellular carcinoma[28, 29]; however, its role in glioma was not investigated previously. In present study, we show that hsa_circ_0091581 is upregulated in glioma tissues and cell lines and can promote the proliferation, migration, and invasion of glioma cells in vitro.

To determine the mechanism of action of hsa_circ_0091581 on glioma proliferation, migration, and invasion, we used the results described in the literature that suggested that circRNAs can play a regulatory role by adsorbing miRNAs [30-32]. Hsa_circ_0001785 sponges miR-942 to regulate breast cancer progression [33]; hsa_circ_0005556 sponges miR-4270 to facilitate gastric cancer progression [34]; and hsa_circ_0004913 act as a sponge for miR-184 and is thus involved in the progress of hepatocellular carcinoma [35]. Ji and Wei et al. reported that hsa_circ_0091581 is involved in hepatocellular carcinoma progression by sponging miR-591 and miR-526b [28, 29]. In the present study, hsa_circ_0091581 was able to sponge miR-1243-5p involved in the progression of pancreatic cancer as a target of hsa_circ_0002570 [36]. Then, a search of an online database and luciferase reporter assays were used to select RecQ-mediated genome instability protein 1 (RMI1) as the target of miR-1243-5p. RMI1 plays an important role in DNA repair and is closely associated with many human diseases, including tumors, obesity, and Bloom syndrome [37-39]. However, the role of RMI1 in glioma has not been reported previously. Our data indicate that RMI1 is upregulated in glioma tissues and cell lines, and qRT-PCR, western blot, and functional assays demonstrated that RMI1 is a functional target of miR-1243-5p. Additionally, rescue experiments suggested that hsa_circ_0091581 regulates the expression and function of RMI1 in a miR-1243-5p dependent manner. Finally, in vivo assays suggested that hsa_circ_0091581 can inhibit glioma growth, and this effect was mediated by miR-1243-5p and RMI1.

In summary, hsa_circ_0091581 can promote glioma proliferation, migration, and invasion via the hsa_circ_0091581/miR-1243-5p/RMI1 axis and may be a novel therapeutic target in glioma.