Methods: Between 2014 and 2019, 41 patients with metastatic GIST received regorafenib and 37 of them facing progression.

Conclusions: Cytoreductive surgery might be feasible in highly selected patients with pre-treated GIST who are being treated with regorafenib experiencing LP.

Since 2001, imatinib mesylate (IM) has become the first line therapy for patients with metastatic gastrointestinal stromal tumors (GISTs). We observed metastatic GIST patients experienced durable periods of disease control by IM treatment lasting from months to years, but they eventually faced disease progression with a median progression-free survival (PFS) of 37 months [1]. Furthermore, cytoreductive surgery has been proposed as one of the treatment modalities to achieve long-term PFS and OS in patients with metastatic GIST on IM therapy [2-8]. However, we still cannot define cytoreductive surgery combined with IM actually improves prognosis than IM therapy alone (without any surgery) in the subset of patients with stable or responsive disease on IM because there is no phase III randomized trial successful due to poor patients enrollment [9].

Sunitinib malate (SU), a multi-targeted tyrosine kinase inhibitor, has become the second-line treatment when patients who develop resistance to or are intolerant of first-line IM treatment. We ever reported the median PFS for metastatic GIST patients treated with SU is 11 months [10]. Although regorafenib is approved as the third-line therapy for IM- and SU-pre-treated GIST patients currently [11], appropriate treatment for patients with progression of disease and with regorafenib treatment has not been investigated. According to Asian GIST consensus guideline, there is no evidence to recommend surgery during SU or regorafenib [12]. Although we reported surgery may provide survival benefit in selected patients receiving SU facing LP [10], the impact of surgery on patient with regorafenib facing LP is still unknown. Most importantly, in Taiwan, the clinical trial is not easily accessible and even unavailable; the role of cytoreductive surgery, which may provide patients more time till newly developed therapy available, in these pre-treated GIST patients should be fully defined. We herein report the feasibility of cytoreductive surgery, PFS, and OS specifically in patients with metastatic GISTs who were taking regorafenib and experiencing LP.

Between 2014 and 2019, 41 metastatic GIST patients receiving regorafenib therapy in the Department of Surgery at Chang Gung Memorial Hospital (CGMH) were enrolled. All the patients were managed by a multidisciplinary GIST team composed of medical oncologists and surgical oncologists.

Pathological diagnoses of GIST were confirmed using standard hematoxylin/eosin staining and CD117 immunohistochemistry on formalin-fixed, paraffin-embedded tissues. Tissues were fixed with 10% formalin at room temperature for ≥24 h. Subsequently, PCR was performed as previously described [13] on the DNA isolated from these sections to amplify the genomic DNA sequences of KIT and PDGFRA by Professor CY Tzen at Cathay Memorial Hospital (Taipei, Taiwan). Sequences for mutations of KIT and PDGFRA were analyzed as described previously [13].

Patient data were prospectively collected and recorded in a departmental GIST database. This retrospective study was approved by the local institutional review board of CGMH. Written informed consent for the analysis of tumor-associated genetic alteration was obtained from each patient.

We prospectively collected the data from the medical record, including initial presentation (primary/metastatic), details of all operations for primary and metastatic disease, best responses to IM, SU, and regorafenib, response to regorafenib, disease extent, and extent of surgery at the time of surgery on regorafenib, post-operative complications, progression after surgery while on regorafenib, last follow-up, and, whenever applicable, death, and then retrospective analyzed all aforementioned parameters. All patients were treated with IM and SU prior to starting regorafenib. Regorafenib dose and dosing intervals were determined by the protocol under which the patient was enrolled. We used Response Evaluation Criteria in Solid Tumor group (RECIST) criteria to define the best responses to IM, SU, and regorafenib therapy as either complete response, partial response, stable disease, or progressive disease [14]. All patients with LP were grouped together for analysis. LP, local progression, was defined as previous study by Raut et al in 2006 [6]. Under the condition of LP, most of lesions are either stable or responding to regorafenib therapy and, importantly, all lesions with progression can be resected theoretically.

Decisions to proceed with cytoreductive surgery were made jointly by the GIST team, including medical and surgical oncologists. Although the optimal interval for being off-the-drug was not yet known, regorafenib was discontinued the day before elective surgery. We performed cytoreductive surgery to remove all sites of disease in patients with LP and preserve organ function to the greatest extent possible. Once the aforementioned goals were achieved, most patients underwent further cytoreduction of as much additional disease as possible, given the constraints of the patient's overall health and the location and extent of disease. Most patients resumed their preoperative regorafenib regimen at the time of their first post-operative visit to clinic. Post-operative follow-up consisted of physical examination and computed tomography (CT) scans at 3-month intervals.

Supplementary Table 2 summarizes the demographic data and initial treatment details of these 15 metastatic GIST patients with regorafenib facing LP receiving surgery before regorafenib treatment. There were 8 males and 7 females with median age of 28 years old when they were diagnosed with GIST. Cytoreductive surgery was performed after a median of 4.88 months after regorafenib initiation. Almost all the operations were performed electively and only one patient received emergent surgery due to gastrointestinal bleeding.

Table 3 summarized tumor characteristics between patients with or without surgery when LP after regorafenib treatment. LP occurred most commonly as intra-abdominal tumor (10/21; 47.62%), followed by liver (7/21; 33%) and peritoneal lesion (6/21; 28.57%). Resection of intra-abdominal tumor (10/15; 66.7%) comprised the most common surgical procedures and followed by resection of the peritoneal lesion (5/15; 33.3%). Gross tumor clearance with negative evidence of disease was achieved in 26.7% (4/15) of patients with local progressive disease. While the number of lesions was smaller in surgical group, both maximal size of lesion and size summation of lesions were larger in patients without surgery. Surgical complexity score groups are lower in the non-surgical group than surgical group. This may be due to the surgical complexity scores mainly depend on the operative procedures performed based on organ involved and not consider the tumor numbers or sizes.

Five patients (5/15; 33.3%) experienced grade II to III complications, including one gastrointestinal bleeding, one surgical wound infection, one intestinal perforation, one intra-abdominal seroma formation, and one pancreatic stump leakage (Table 4). There was no post-operative death after cytoreductive operation. The length of hospital stays of these 15 patients ranged from 7 to 59 days (median: 13 days). 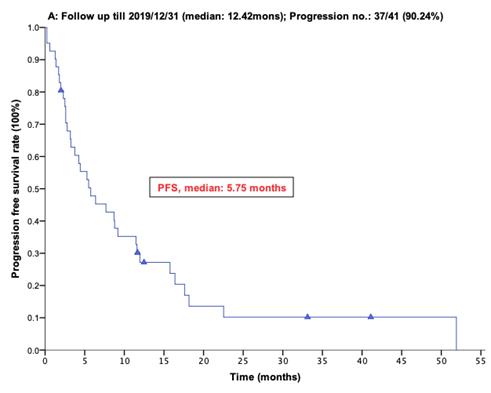 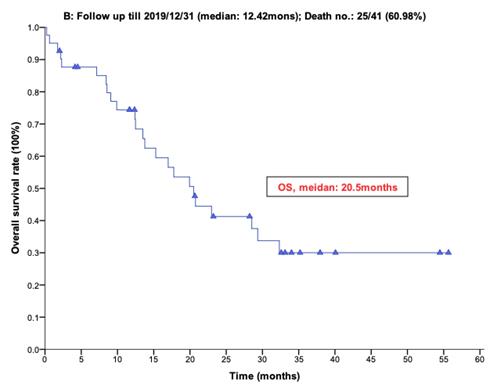 In Taiwan, challenges exist for patients with IM- and SU-pre-treated metastatic GIST who were treated with regorafenib and experienced objective progression because only few treatment options have been provided. In addition, there are no clinical trials for new therapy are available in Taiwan. For example, BLU-285 is reported well-tolerated and provides broad mutational coverage in pre-treated GIST patients [16]. A phase III randomized study comparing BLU-285 to regorafenib as third-line therapy for GIST is planned to begin. However, we cannot participate in this trial in Taiwan. Therefore, other local ablative management, including surgery, should be still considered as a treatment option for metastatic GIST after progression and failure of regorafenib. This study mainly demonstrated the impact of surgery on progression after regorafenib use, specifically for LP.

As demonstrated in this study, regarding patients of LP treated with cytoreductive surgery, further progression of disease in a median of 5.52 months after surgery is inevitable. Our study demonstrated that surgery for selected patients of LP could significantly prolong PFS and OS after surgery to as long as 12.91 and 32.33 months, respectively, and present result demonstrated better clinical outcome of these selected group, compared with those of LP patients without cytoreductive surgery and DP patients. In addition, LP patients who undergoing cytoreductive surgery in our cohort literally had “additional PFS”, compared to regorafenib alone in previous reported study [11]. Consistent with our previous study, progression of the intra-abdominal tumor is main cause of LP, although it could be bias for the accessibility for surgical intervention in the LP scenario [8]. Therefore, surgery may be regarded as a bridging strategy and combined with other local ablative procedures to prolong survival of selected patients with LP and the prolonged survival could provide the patient an opportunity for treatment with the available next-generation tyrosine-kinase inhibitor or even immunotherapy.

The issue regarding surgical complication for GIST patients with targeted therapy needs attention. Raut et al have emphasized surgery is feasible in patients with metastatic GIST on SU, but incomplete resections are frequent and complication rates are high [17]. Relevance of survival rates is difficult to assess given the selection bias. We still cannot define cytoreductive surgery combined with IM actually improves prognosis than IM therapy alone (without any surgery) in the subset of patients with stable or responsive disease on IM because there is no phase III randomized trial successful due to poor patients enrollment [9]. This fact is even more true for 3rd line therapy. Therefore, benefits of surgery should be weighed against symptoms and alternative treatments [17]. Recently, they further proposed the surgical complexity score can predict morbidity, which may help in preoperative risk stratification and optimal treatment planning [18]. 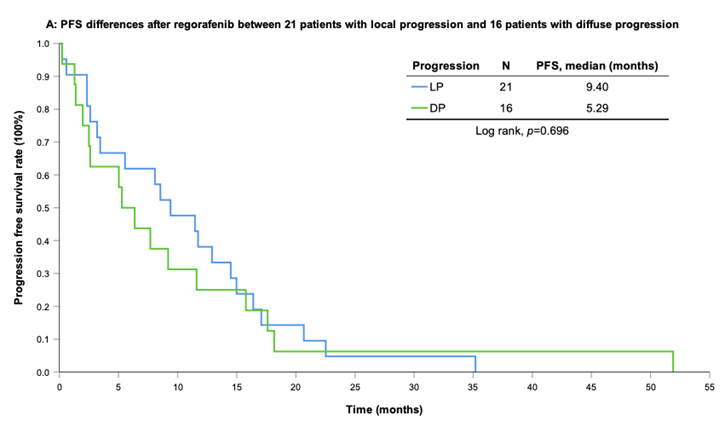 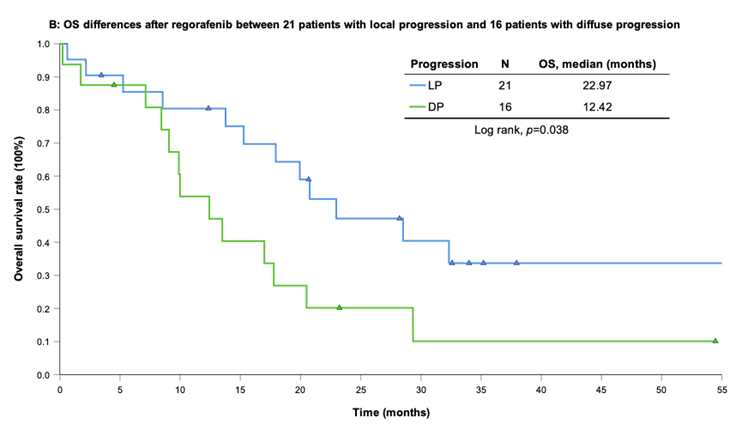 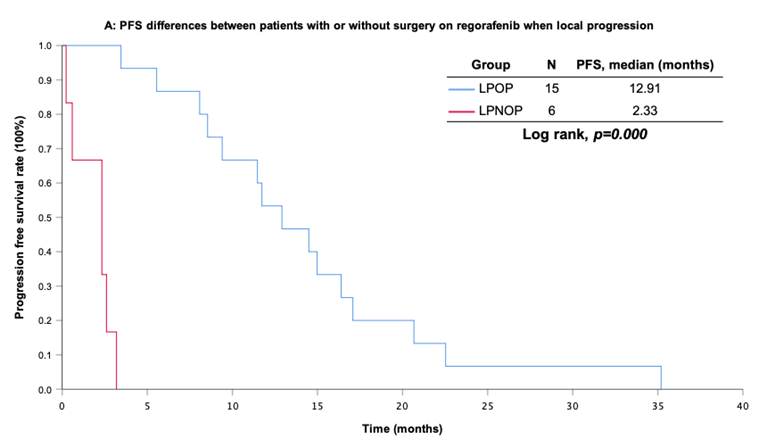 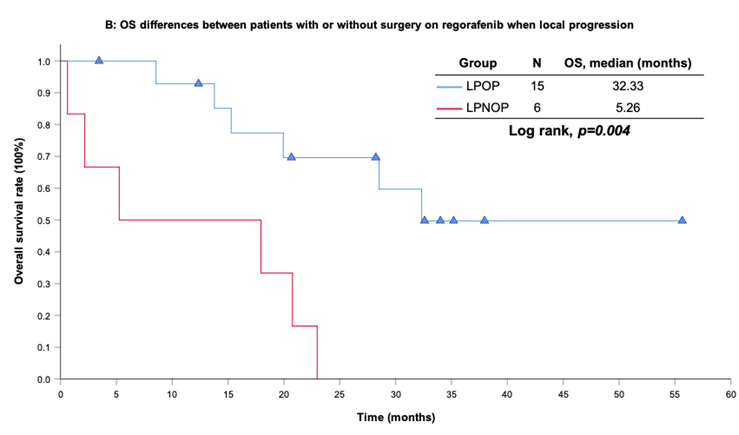 Although our results may support a potential impact of cytoreductive surgery on patients with GISTs who experience LP after regorafenib treatment, there were several limitations inherent to this study. First, this was a retrospective study, and although all data were collected prospectively, selective and recall bias could still not be completely prevented. Secondly, patients in our cohort underwent surgery were younger with good performance. Since there has been no prospective randomized study to demonstrate efficacy of surgery to patients with advanced GISTs who experienced LP after regorafenib treatment, we have to arrange cytoreductive surgery very carefully and prevent patients from complications. Under this general principle, we only recruited patients physically fit for this treatment. Even with this highly selective practice, postoperative complication rate was high. Therefore, selection bias is inevitable under the safety consideration. Additionally, this study was not double-blinded. Therefore, biases related to attitude of both patients and surgeons may exist. The unblinded patients may have had more motivation to receive therapy because they thought they could undergo surgery. Unblinded surgeons may have been more aggressive in facilitating therapy after the operation. Hence, the placebo effect could not be completely avoided in this study. To overcome these limitations, our results should be confirmed by further prospective randomized controlled trials that examine surgical benefits for patients with advanced GISTs who experience LP after regorafenib treatment. 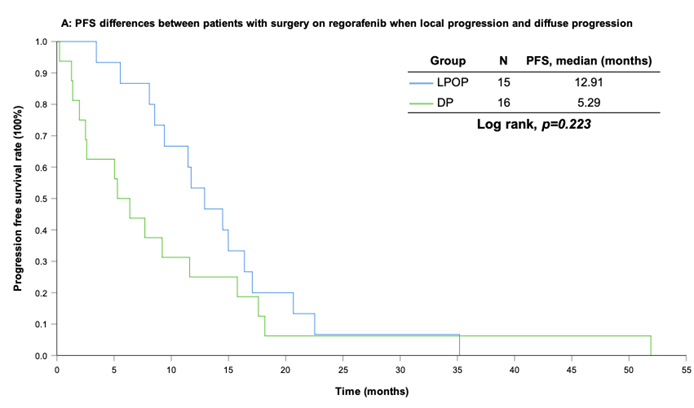 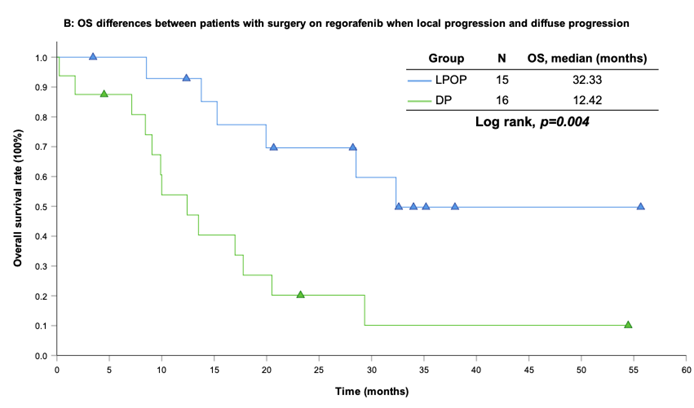 In conclusion, cytoreductive surgery might be beneficial in highly selected patients with pre-treated GIST who are being treated with regorafenib experiencing LP compared to LP without operation, demonstrated by longer PFS and OS after cytoreductive surgery by experienced surgeons. This strategy may be considered as a bridging strategy for patient to further novel medication.