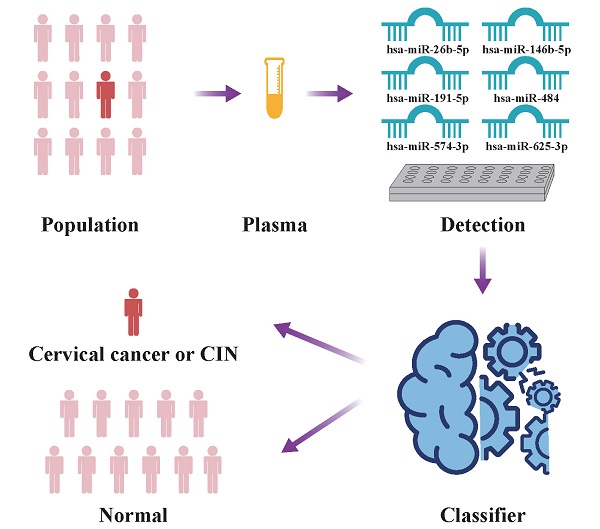 Background: Cervical cancer is the most common malignant tumor in the female reproductive system, while the efficacy of routine screening strategy is unsatisfied. New molecular tests need to be developed. miRNAs participate in many pathologic processes, and circulating miRNAs are promising non-invasive biomarkers in tumors.

Methods: This study consisted of 5 steps: miRNAs screening, miRNAs validation, classifier establishment, independent validation and in silico analyses. Three cohorts were included in our study: In screening stage, 24 samples including 14 cases and 10 controls were retrieved; In validation stage, 380 samples including 200 cases and 180 controls were recruited; In independent validation stage, 47 samples comprising 26 cases and 21 controls were included. miRNAs were quantified by RT-qPCR. A classifier was built with random forest algorithm using validation samples and selected miRNAs, which were then validated in an independent cohort. To explore the function of selected miRNAs, in silico analyses were performed. Target genes of selected miRNAs were predicted by the overlap of three online tools. Enrichment analyses were executed with predicted target genes. Differential analysis of target genes was carried out with open access expression assay datasets of cervical tissues.

Conclusion: The 6 circulating miRNAs were related to cervical lesions and could serve as non-invasive biomarkers.