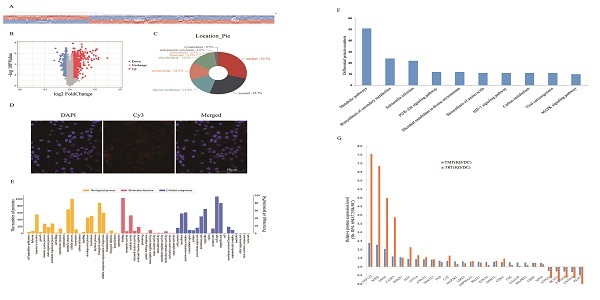 Background: Long noncoding RNAs (lncRNAs) have emerged as gene regulators in various cancers, including hepatocellular carcinoma (HCC). However, the biological roles and mechanisms of many lncRNAs in HCC tumorigenesis remain unknown.

Aim: To identify novel lncRNAs associated with proliferation and metastasis in HCC.

Results: RP4-694A7.2 levels were higher in HCC tissues than in normal liver tissues in published GSE datasets and were elevated in HCC cell lines. Cell function assays revealed that RP4-694A7.2 promotes cell proliferation, invasion, and migration. Furthermore, RP4-694A7.2 was primarily found to be located in the cytoplasm by FISH assay. Then, TMT assay was performed to predict proteins associated with RP4-694A7.2, and 28 cytoplastic proteins were identified by PRM. Finally, phosphoserine aminotransferase 1 (PSAT1) was found to be regulated by RP4-694A7.2 to modulate growth and metastasis in HCC cells using a rescue assay.

Hepatocellular carcinoma (HCC) is a leading cause of cancer-related deaths worldwide. Despite treatment advances, HCC mortality is still high [1,2]. The lack of therapeutic strategies can be explained by the limited understanding of the mechanisms underlying HCC, which are complex diverse and vary among individuals [3]. Therefore, studies of the underlying mechanism are expected to improve outcomes and decrease mortality in HCC.

Long non-coding RNAs (lncRNAs) are a class of non-coding RNAs more than 200 nucleotides in length [4]. lncRNAs regulate gene expression at the epigenetic, transcriptional, and post-transcriptional levels and can promote or suppress cell signaling pathways in different types of cancer [5,6]. Accumulating evidence has revealed the importance of lncRNAs in the development of HCC, including roles in proliferation, angiogenesis, metastasis, and genomic stability [7-13]. Although several lncRNAs involved in the development of HCC have been identified, the precise functions of most lncRNAs have not been characterized. For example, lncRNA RP4-694A7.2 was previously described to be upregulated in some solid cancers compared to their respective normal tissues through bioinformatics analyses [14]. This lncRNA was also overexpressed in highly proliferative stages of normal B cell differentiation [15]. Although those studies showed that RP4-694A7.2 was associated with cancers, the function of the molecule in most cancers remains unclear.

In the present study, differentially expressed lncRNAs in two HCC-related GSE datasets (GSE94660 and GSE104310) were analyzed. The expression and localization of the candidate lncRNA RP4-694A7.2 were further assessed in HCC cells. Functional experiments suggested that RP4-694A7.2 promotes proliferation and metastasis in HCC. Phosphoserine aminotransferase 1 (PSAT1), an important factor in HCC, was regulated by PR4-694A7.2, as determined by tandem mass tags and parallel reaction monitoring. Our study suggested that RP4-694A7.2 could be a potential therapeutic target in HCC.

lncRNA-Seq high-throughput sequencing and subsequent bioinformatics analyses were all performed by Cloud-Seq Biotech (Shanghai, China). Briefly, paired-end reads were subjected to a quality control threshold of Q30. After 3′ adaptor-trimming and low-quality read removal using cutadapt (v. 1.9.3), the high-quality trimmed reads were aligned to the human reference genome (UCSC hg19) using HISAT2 (v. 2.0.4). Next, HTSeq (v. 0.9.1) was used to obtain raw counts at the gene level (mRNA) and transcript level (lncRNA) as the expression profiles, and edgeR (v. 3.16.5) was used to normalize the counts and screen differentially expressed lncRNAs and mRNAs.

LO2 and SK-Hep1cells were purchased from the Cell Bank, Type Culture Collection, Chinese Academy of Sciences (CBTCCCAS). All cells were incubated under standard culture conditions (37°C and 5% CO2).

For RP4-694A7.2 knockdown, interfering lncRNAs targeting RP4-694A7.2 were acquired from GeneChem (Shanghai, China). To construct LV-RP4-694A7.2-RNAi, SK-Hep1 cells suspended in DMEM were incubated in a 6-well plate. Next, cells were incubated with the lentivirus packaging vector (GV112). Fluorescence was captured using a fluorescence microscope (Olympus, Tokyo, Japan) at 72 h after lentiviral infection. The knockdown efficiency was examined by RT-PCR.

After transfection for 72 h, SK-Hep1 cells were incubated in 6-well plates (1000 cells per well). After culture for 2 weeks, colonies were dyed with Crystal Violet Staining Solution and evaluated.

Suspended SK-Hep1 cells were added to a 96-well plate at 5 × 105/mL per well. A scratch tester was used to draw lines on the plates. Next, samples were washed with serum-free medium and added to serum-based medium. Images were obtained at 0, 24, and 32 h. Cell mobility (%) was calculated according to the following formula: (1 - scratch width/initial scratch width) × 100.

SK-Hep1 cells were suspended and incubated in 24-well plates (5 × 105 cells per well). In the upper chamber, 100 µL of cell suspension was added. In the lower chamber, 600 µL of FBS culture medium was added. After 16 h of culture, the chambers were stained with Crystal Violet Staining Solution and evaluated.

After samples were digested, they were labeled using TMT reagent according to the manufacturer's instructions (Thermo Fisher Scientific, Waltham, MA, USA). TMT-labeled peptides were fractionated by RP chromatography using the Agilent 1260 infinity II HPLC and evaluated by LC-MS/MS. A peptide and protein false discovery rate of 1% was enforced using a reverse database search strategy [17]. Proteins with fold change > 1.2 and p-value (Student's t-test) < 0.05 were considered differentially expressed. 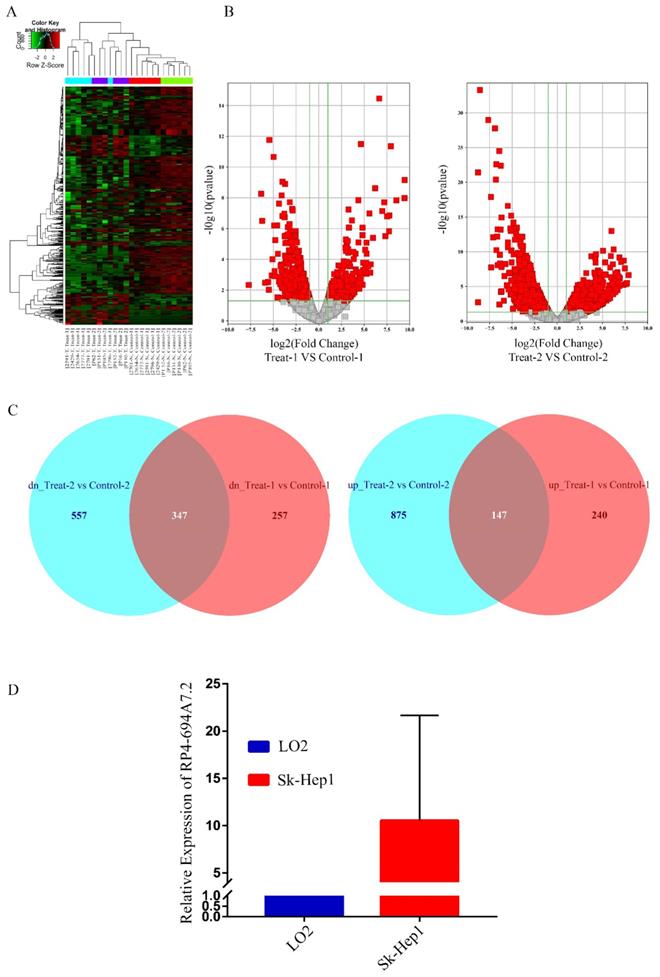 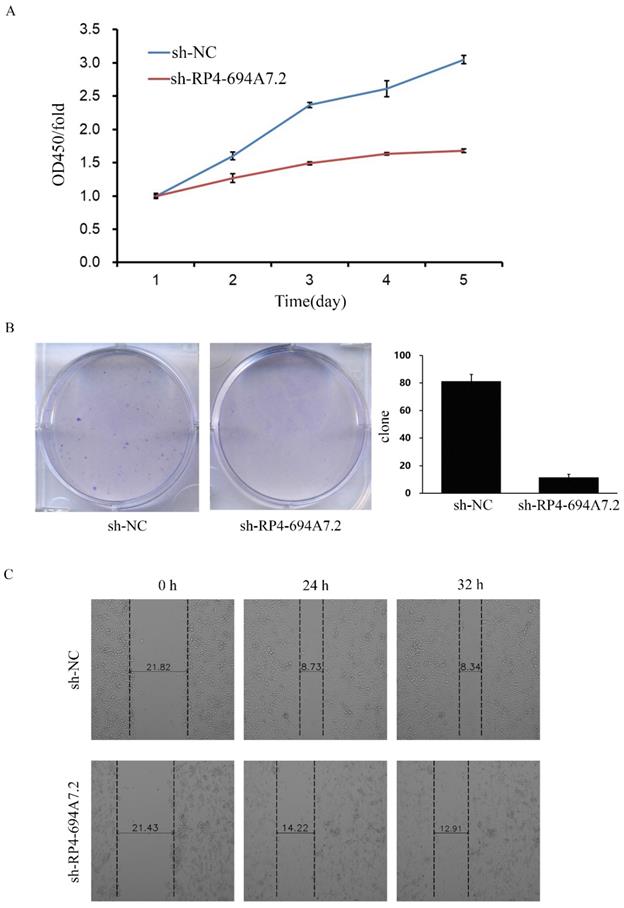 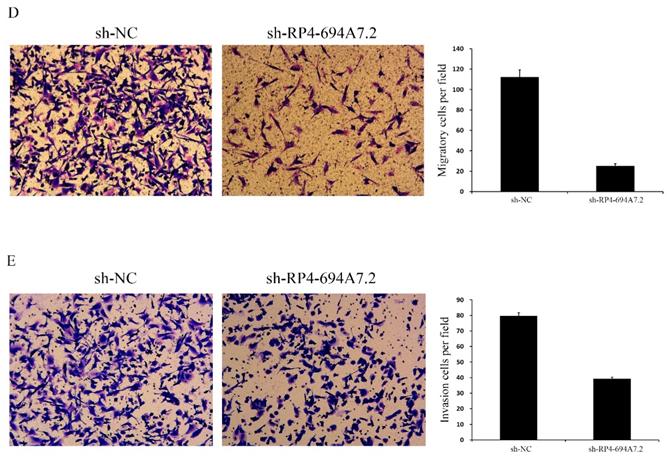 To investigate the molecular mechanism underlying the effects of RP4-694A7.2 in HCC, a TMT assay was performed to predict proteins associated with RP4-694A7.2. The TMT assay results are shown in Figure 3A. We identified 1106 proteins that were predicted to interact with RP4-694A7.2 (Figure 3A, 3B). Those proteins were mainly located in the nucleus (29.1%) and cytosol (25.7%) (Figure 3C). Next, a FISH assay was performed using SK-Hep1 cells to detect the location of RP4-694A7.2. Our results showed that RP4-694A7.2 was primarily located in the cytoplasm of SK-Hep1 cells (Figure 3D).

Based on these results, the functional enrichment analysis of 284 cytoplasmic proteins out of 1106 proteins was performed to further investigate their effects, which were mediated by highly expressed proteins associated with RP4-694A7.2, on physiological processes.

The differentially expressed plasma proteins associated with RP4-694A7.2 were evaluated by KEGG analysis to analyze the major biological pathways and regulatory processes. The top 10 enrichment analysis pathways are shown in Figure 3F.

Identification of proteins associated with RP4-694A7.2 in HCC cells

To validate the results of proteomic analyses, we further selected 28 cytoplasmic proteins related to HCC for a PRM analysis. The screening criteria were selected based on the following principles: 1) proteins with potential biological function; 2) fold changes of >1.2 for upregulated proteins and <0.8 for downregulated proteins and a p-value of <0.05 were the established thresholds; and 3) inclusion in the top 10 enrichment analysis pathways.

PRM showed that 23 proteins were upregulated and 5 proteins were downregulated. The PRM results were consistent with those of TMT analysis (Figure 3G). We further selected the proteins whose trend was consistent with that of RP4-694A7.2 for analysis. At last, five proteins-Annexin A4 (ANXA4), tyrosine 3-monooxygenase/tryptophan 5-monooxygenase activation protein theta (YWHAQ), tyrosine 3-monooxygenase/tryptophan 5-monooxygenase activation protein eta (YWHAH), PSAT1, and branched-chain amino acid transaminase 1 (BCAT1)-were included. 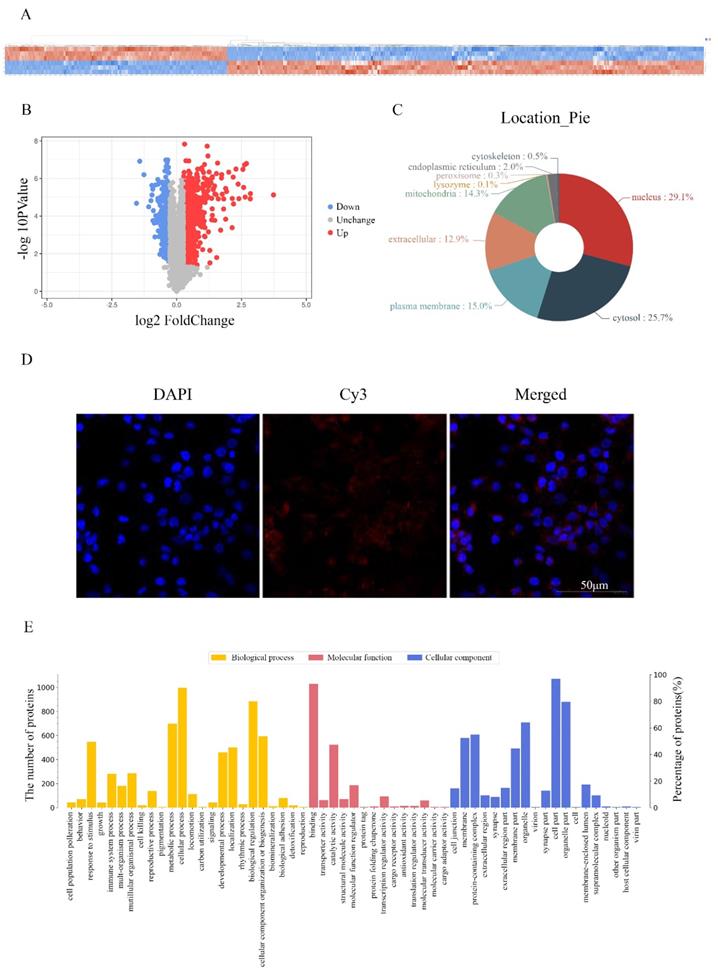 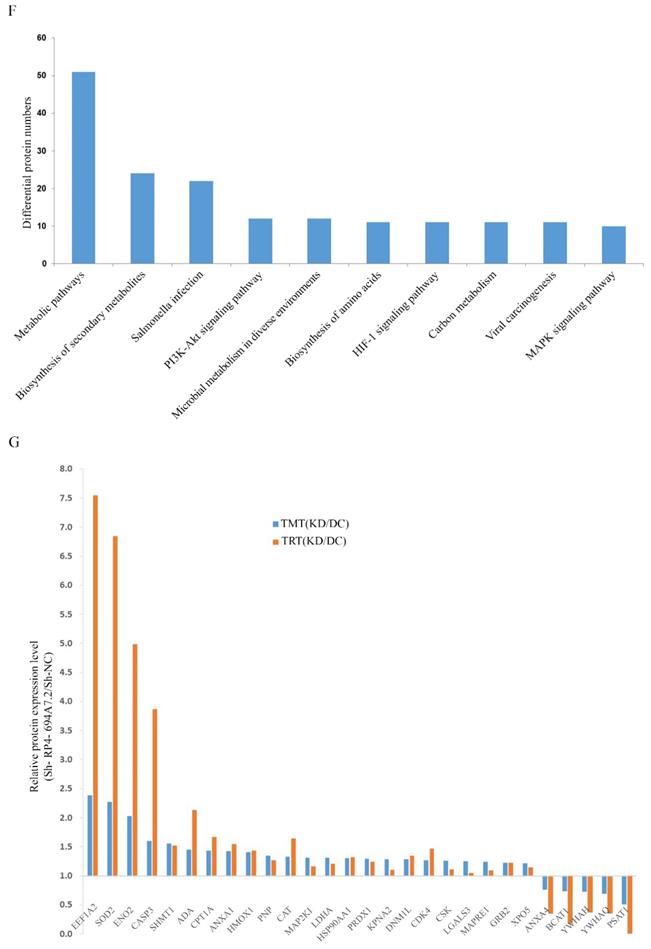 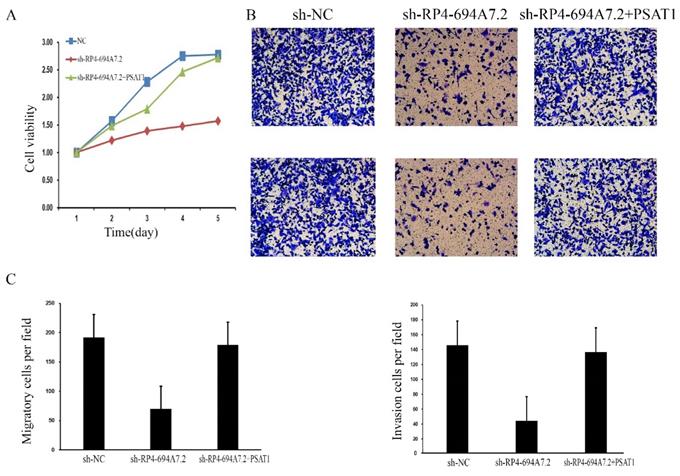 LV-RP4-694A7.2 regulates the progression of HCC by interacting with PSAT1

These results showed that PSAT1 is necessary for the RP4-694A7.2-mediated regulation of HCC cell proliferation (Figure 4A), migration, and invasion (Figure 4B).

HCC is a common malignant tumor and its progression is complex, involving cross-talk among many factors, including both genetic and epigenetic changes. Recently, lncRNAs have emerged as important contributors to the biological processes underlying the pathophysiology of many human diseases, including HCC [3]. A number of lncRNAs have been identified because of advances in bioinformatics approaches and next-generation sequencing technology. Networks composed of lncRNAs regulate proliferation, metabolism, metastasis, and other processes in various malignant diseases.

In this study, we first identified dysregulated lncRNAs in two GSE data sets related to HCC generated by high-throughput sequencing. We found that RP4-694A7.2 expression is higher in HCC malignant tissues than in normal liver tissues. Recently, RP4-694A7.2 has been found in some solid cancers [14,19]; however, its expression patterns and functions in HCC are still unknown. Our results suggested that RP4-694A7.2 is upregulated in HCC and might contribute to tumorigenesis.

To explore the mechanism associated with the effects of RP4-694A7.2, FISH was used to determine the distribution of RP4-694A7.2 in SK-Hep1 cells. Next, TMT was performed to identify the proteins regulated by RP4-694A7.2. As RP4-694A7.2 was mainly distributed in the cytoplasm, 28 cytoplasmic proteins associated with HCC were detected by PRM analysis. Rescue experiments clearly indicated that PSAT1 was overexpressed in HCC and regulated cell proliferation and metastasis.

The serine synthesis pathway (SSP) is an important pathway in cancer metabolism [20]. PSAT1, 3-phosphoglycerate dehydrogenase (PHGDH), and phosphoserine phosphatase (PSPH) are three important regulators in the SSP. A study has found that the expression of PSAT1, which is an enzyme that catalyzes the second step of the SSP, is related to cell proliferation and cancer development [21]. High PSAT1 expression has been detected in non-small cell lung cancer, breast cancer, and esophageal squamous cell carcinoma, and PSAT1 expression can enhance tumorigenesis and metastasis [22-24]. Moreover, PSAT1 could be regarded as a prognostic marker in cancer, as PSAT1 overexpression could indicate a poor prognostic outcome [25]. Our results also indicated that PSAT1 is regulated by lncRNA RP4-694A7.2 to modulate HCC cell growth and metastasis.

RP4-694A7.2 has been proven to play an oncogenic role in the cancer development and pathogenesis; it may participate in cell-cycle control, and its silencing reduced the S-phase fraction together with a block of the G1/S phase [19]. Our results further showed that numerous proteins that interact with RP4-694A7.2 are associated with catalytic activity and molecular function regulation. PSAT1, a necessary enzyme that makes 3-phosphoglycerate from glycolysis and converts it to serine in the SSP [26], could promote cyclin D1 expression via the GSK3β/β-catenin pathway, which eventually led to the acceleration of cell cycle progression [22]. In addition, a previous study showed that PSAT1 may participate in glycolysis and amino acid metabolism in human HCC tissue-derived metabolic [27]. Consistent with our PRM and TMT results, metabolic pathways were the most enriched. In summary, we speculated that RP4-694A7.2 may regulate glycolysis function by PSAT1 via the GSK3β/β-catenin pathway during HCC cell growth and metastasis.

This study also has several limitations. Although we identified that RP4 694A7.2 may act as an oncogene to promote cell proliferation, invasion, and migration by targeting PSAT1, more regulatory factors and molecular elements that interact are still unknown. Further studies are required to clarify these molecular elements and the interactions among them. In addition, the clinical application of RP4 694A7.2 needs to be explored in the future.

In summary, the results of our study illustrate that RP4-694A7.2 is upregulated in HCC and promotes cell proliferation and metastasis via PSAT1.