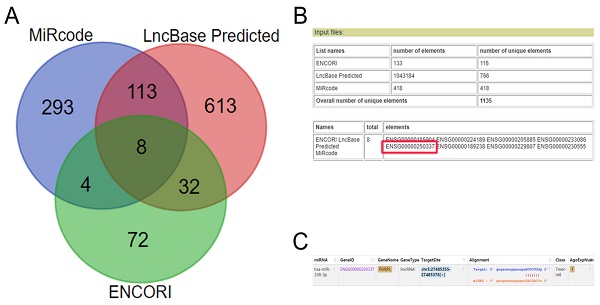 Objective: The present study aimed to explore the expressions of long noncoding RNA (lncRNA) p53 upregulated regulator of p53 levels (PURPL) in different ovarian tissues, and to evaluate the significance of disregulations of PURPL and microRNA-338-3p (miR-338-3p) in epithelial ovarian cancer (EOC).

Our previous data indicated miR-338-3p was downregulated and MACC1 was upregulated in epithelial ovarian cancer, and was related with poor prognosis of ovarian cancer [9]. We tried to explore the upstream regulated lncRNAs of miR-338-3p to analyze their roles in the development and progression of ovarian cancer in present study. Biomedical database queries showed that lncRNA p53 upregulated regulator of p53 levels (PURPL) could target miR-338-3p. PURPL, also known as LINC01021, was detected to be upregulated in gastric cancer tissue, and was related to tumor size and histopathological grade, which indicated poor clinical outcomes [10]. Rare reports were involved in the relations between PURPL and ovarian cancer.

Multiple biomedical databases, including ENCORI [11], miRcode (http://www.mircode.org/) and LncBase Predicted [12] were used to predict the relation between PURPL and miR-338-3p. Pubmed (https://pubmed.ncbi.nlm.nih.gov/), cBioPortal [13], lncRNASNP2 [14], GEPIA [15] were used to query the expressions of PURPL in normal and malignant human tissues. Kaplan-Meier Plotter [16] was used to analyze the relations between PURPL and the prognosis of ovarian cancer.

All enrolled fresh different ovarian tissue specimens of 105 patients were collected and saved in the First Affiliated Hospital of Zhengzhou University. There were 20 cases of normal ovarian tissues, 20 cases of benign ovarian epithelial tumor tissues, and 65 cases of primary lesions of newly diagnosed epithelial ovarian cancer. Complete detailed clinic parameters and detailed criteria for the inclusion and exclusion of patients enrolled were described in detail in our previous report [9]. Consent from patients or family members and approval by the Ethics Committee of the First Affiliated Hospital of Zhengzhou University was received for collection and use of all tissue samples.

Total RNA isolation, cDNA reverse-synthesis and SYBR Green PCR assay procedures were described in our previous report [9]. The primers used in PCR were synthesized by Shanghai Sangon Biotech Co., Ltd. The primer sequences were shown in Table 1. Each PCR experiment was performed three times independently, and the relative expression values were expressed by 2-ΔΔCt method. 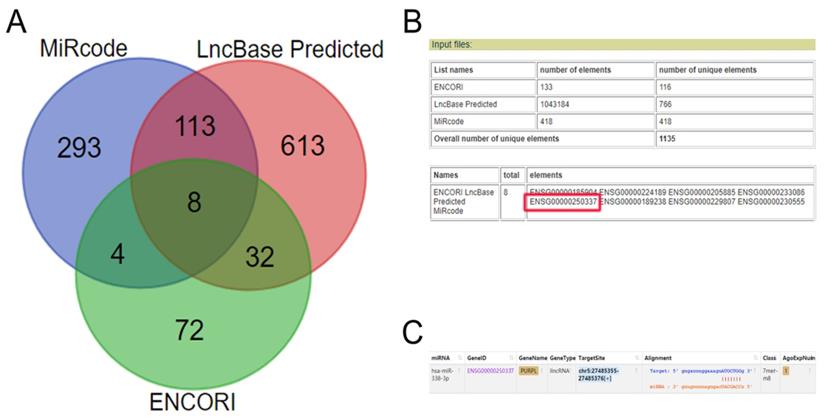 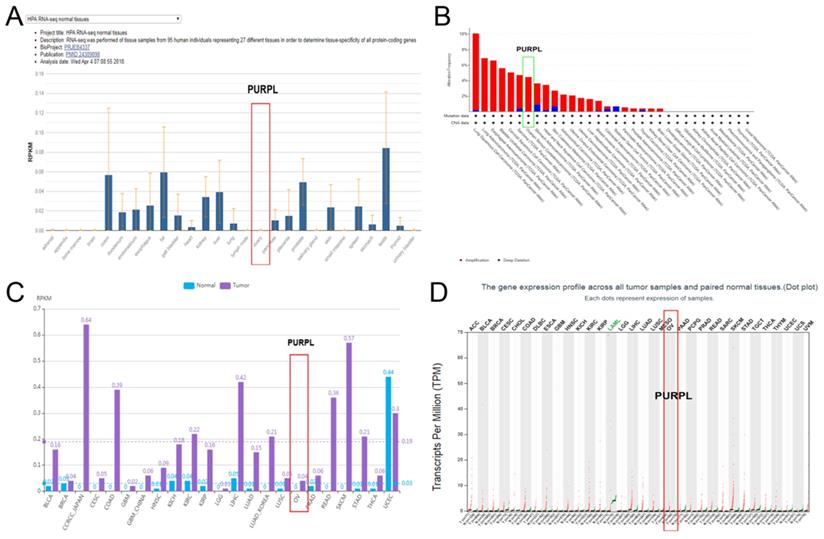 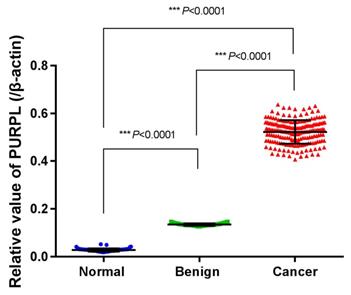 The median relative level of PURPL in 65 cases of epithelial ovarian cancer was (0.525±0.006), which was used to divide PURPL expression into relatively high group (higher than or equal to the median expression) and relatively low group (lower than the median expression). The expressions of PURPL were significantly higher in the EOC patients with more advanced clinical stage and developed lymph node metastasis (Table 2).

The relationships between PURPL expressions in EOC tissues and clinicopathological parameters of EOC (n, %) 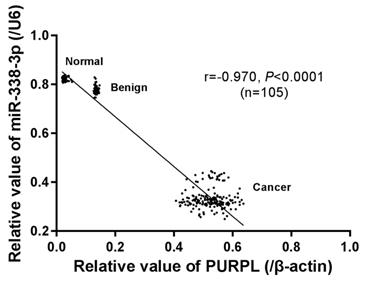 We also used the same collected data to analyze the significance of PURPL and miR-338-3p for the prognosis of EOC. The follow-up details of enrolled EOC patients were described in our previous report [9]. The median expression was set to divide sub-expression groups for PURPL and miR-338-3p. The endpoints of the study were death and recurrence. Survival or no recurrence at the end of the follow-up was defined as the censored event, which was censored in statistics. At the end of the follow-up, the RFS rate of the EOC patients with high level of PURPL and low level of miR-338-3p was notably worse than other patients (χ2=19.410, P=0.0002), as well as the OS rate (χ2=17.600, P=0.0005). Shown in Figure 7.

Exploring the roles of noncoding RNAs in the development and progress of ovarian cancer could provide potential molecular targets and markers for clinical treatment and prognostic monitoring of ovarian cancer. MiRNAs were closely related with the development and progress of human cancers, which had been well proved. The roles of miR-338-3p disregulation in human malignancies were well discussed, such as colorectal carcinoma [17], gastric cancer [18], ovarian epithelial carcinoma [19], breast cancer [20] and lung cancer [21]. The present report was an extension of our previous researches about the relations between miR-338-3p and ovarian cancer. Our reported data indicated miR-338-3p was downregulated in ovarian cancer, and involved in the growth and metastasis of ovarian cancer cells might due to the regulation of cell proliferation and EMT induced by MACC1, Met and its downstream Wnt/Catenin beta and MEK/ERK signaling pathways [9, 22].

PURPL is about 1120bp in length, located on human chromosome 5p14.1. PURPL was reported to be involved in the development and progression of colorectal cancer, liver cancer and gastric cancer [30-32]. The roles of PURPL involved in ovarian cancer have never been reported. We dug out database information about PURPL in human malignancy. PURPL was upregulated in several human cancers, including ovarian cancer. Upregulation of PURPL indicated poor RFS and OS for ovarian cancer patients. Moreover, PURPL expression showed a negative expression profile with miR-338-3p expression.

To verify the results queried in biomedical databases, we also collected normal, benign and malignant ovarian tissues to analyze the roles of PURPL in the ovarian cancer. Based on our conserved tissue specimens, expressions of PURPL were detected by real time PCR. Instead of normal ovarian tissues and benign ovarian tumor tissues, obvious upregulations of PURPL were measured in EOC tissues, which suggested abnormal expression of PURPL might be implicated in the carcinogenesis of ovarian cancer. We also analyzed the relations between PURPL expression and clinicopathological parameters of EOC. Positive relations were noted between PURPL expression and clinical stage and lymph node metastasis of EOC. Furthermore, upregulation of PURPL was a high risk factor for the recurrence and death of EOC patients. These data all indicated upregulation of PURPL might relate to poor prognosis of EOC.

According to biomedical databases query and collected cohort tissue analysis, our present data suggested that PURPL was upregulated in EOC, PURPL expression was negatively related to miR-338-3p, and disregulations of PURPL and miR-338-3p presented poor prognosis of EOC.

We thank the Clinical Medicine Key Disciplines Laboratory of Henan Province for assistance with experiments. Our work was supported by the Scientific and technological projects of Henan Province (202102310392), and in part by the Youth Innovation Fund Project of the First Affiliated Hospital of Zhengzhou University (201418).