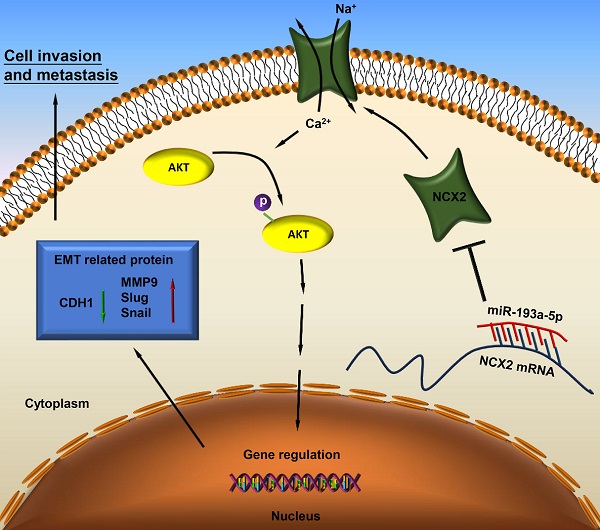 MiR-193a-5p has been observed to have oncogenic or tumor suppressive functions in different kinds of cancers, but its role and molecular mechanism in osteosarcoma are elusive. Na+/Ca2+ exchangers (NCX1, NCX2 and NCX3) normally extrude Ca2+ from the cell, and deregulation of the intracellular Ca2+ homeostasis is related to several kinds of diseases, including cancer. The present study demonstrated that miR-193a-5p was upregulated in osteosarcoma tissues compared with the corresponding adjacent noncancerous tissues, and promoted colony formation, migration, invasion and epithelial-mesenchymal transition (EMT) in osteosarcoma cells (SaOS-2 and U-2OS), as well as metastasis in a murine xenograft model. Tandem mass tag-based quantitative proteomics analysis identified NCX2 as a potential target of miR-193a-5p. Luciferase activity assays and Western blotting further confirmed that miR-193a-5p recognized the 3′-untranslated region of NCX2 mRNA, and negatively regulated NCX2 expression. NCX2 was downregulated in osteosarcoma tissues, and its expression was negatively correlated with miR-193a-5p levels. Ectopic expression of NCX2 in osteosarcoma cells could reverse the oncogenicity of miR-193a-5p, indicating that miR-193a-5p exerted its effects by targeting NCX2. Further study demonstrated that NCX2 suppresses Ca2+-dependent Akt phosphorylation by decreasing intracellular Ca2+ concentration, and then inhibited EMT process. Treatment with the antagomir against miR-193a-5p sensitized osteosarcoma to the Akt inhibitor afuresertib in a murine xenograft model. In conclusion, a miR-193a-5p/NCX2/AKT signaling axis contributes to the progression of osteosarcoma, which may provide a new therapeutic target for osteosarcoma treatment.

Osteosarcoma is the most prevalent malignant bone tumor. It commonly occurs in adolescents and young adults, the highest incidence is among those aged 10-19 years [1]. The tumors mainly develop in the bones around the knee, either in the distal femur or the proximal tibia [2]. Osteosarcoma is a highly aggressive cancer; that is prone to metastasis or recurrence. Approximately 16.7% of patients present lung metastases at initial diagnosis [3], and 30% to 40% of patients have recurrence [4]. Although the introduction of adjuvant chemotherapy following surgery has improved the 10-year overall survival (OS) rate from 30% to approximately 50%, no improvement in OS has been achieved since the 1990s [4]. Thus, it is necessary to investigate the molecular pathogenesis of osteosarcoma to improve the efficacy of diagnosis and treatment.

Na+/Ca2+ exchangers (NCXs), also called solute carrier family 8 (SLC8), are a type of ion transporters that operate by a stoichiometry of three Na+ ions for one Ca2+ [16, 17]. NCXs normally extrude Ca2+ from the cell, but also bring Ca2+ into the cell under special conditions [16, 17]. In mammals, NCXs consist of three members: NCX1 (SLC8A1) has a ubiquitous distribution, while NCX2 (SLC8A2) and NCX3 (SLC8A3) are exclusively expressed in the brain [16, 17]. Recently, NCX2 was also found to be expressed in stomach [18] and kidney [19]. NCX2 expression is upregulated during RANKL-induced osteoclast differentiation [20]. All three NCX proteins play important roles in regulating intracellular Ca2+ homeostasis, and deregulation of Ca2+ homeostasis is related to several kinds of disease, including cancer [21]. Increasing evidence shows that NCXs are involved in tumorigenesis and progression [22-24]. It has been reported that NCX2 is silenced by DNA methylation in human glioma [25], and ectopic expression of NCX2 inhibits growth, angiogenesis and invasion of glioblastoma [24]. Reactivation of the tumor suppressor Maspin significantly upregulates NCX2 expression in MDA-MB-231 breast cancer cells, suggesting the potential role of NCX2 in breast cancer [26]. However, the role of NCX2 in osteosarcoma has not been investigated.

In this study, we demonstrate that miR-193a-5p is upregulated in osteosarcoma and promotes colony formation, migration, invasion, and epithelial-mesenchymal transition (EMT) in vitro, as well as metastasis in vivo. NCX2 is a direct target of miR-193a-5p, and it suppresses the EMT process by inactivating Ca2+-dependent Akt activation. Overall, we identified a novel miR-193a/NCX2/AKT signalling axis in osteosarcoma.

Twenty-five pairs of osteosarcoma and matched adjacent noncancerous tissues were collected from the Second Xiangya Hospital, Central South University. The criteria for study entry included: newly diagnosed, no history of other tumors, no other underlying diseases that possibly affect the treatment process, and no special preoperative treatment. The samples were histologically confirmed by haematoxylin and eosin (HE) staining. The clinicopathological characteristics are listed in Supplementary Table S1. This study was approved by the Ethics Committee of the Second Xiangya Hospital.

The cell lines SaOS-2, U-2OS, SJSA-1, MG63 and hFOB1.19 were obtained from ATCC (Manassas, VA, USA) and cultured according to the instructions of ATCC. All the cell lines were mycoplasma-free and authenticated using short tandem repeat analysis by Yubo Biological Technology Co., Ltd. (Shanghai, China).

Lentiviruses expressing miR-193a precursor and the miR-193a-5p target sequence (TCATCTCGCCCGCAAAGACCCA) were used to overexpress and interfere with the expression of miR-193a-5p, respectively. A lentivirus expressing a nontarget sequence (TTCTCCGAACGTGTCACGT) was used as a control. All lentiviruses were purchased from GeneChem (Shanghai, China). Infection and selection for stable cell lines were performed as described previously [10].

Total RNA was extracted from cell lines or human osteosarcoma tissues using TRIzol reagent (Invitrogen, Carlsbad, CA, USA). For analysis of mRNA levels, total RNA was reverse-transcribed into cDNA using the All-in-One First-Strand cDNA Synthesis Kit (GeneCopoeia, Guanzhou, China), the cDNA was then used as a template for real-time PCR with the SYBR Green master kit (GeneCopoeia). The primers for NCX2 are AAGCACCTGAGAGTCTTCTTTGT (forward) and, CAGGCGAATACCACGCACA (reverse). The primers for control 18 S rRNA are CGGCGACGACCCATTCGAAC (forward) and GAATCGAACCCTGATTCCCCGTC (reverse). The expression of mature miRNA was detected with an All-in-One miRNA qRT-PCR kit (GeneCopoeia). Briefly, total RNA was first polyadenylated by poly(A) polymerase and converted into cDNA by reverse transcriptase with oligo-dT primer. Then the cDNA was used as a template for real-time PCR with universal primer and miR-193a-5p-specific primer provided in the kit.

BALB/c nude male mice (4-6-weeks-old) were purchased from SLACCAS Jingda (Changsha, China). SaOS-2 or U2-OS cells stably overexpressing expressing miR-193a precursor, miR-193a-5p target sequence or nontarget sequence were implanted into nude mice by tail vein injection. After the experiment, the mice were sacrificed, the tumor nodules formed on the lung and liver surfaces were counted, and the lungs and livers were embedded in paraffin for HE staining and immunohistochemistry (IHC) assays.

Cells were incubated with Fluo-8 (4 μM) in a 37 °C, 5% CO2 incubator for 1 hour, then washed with PBS three times. Then, fluorescence excitation at 492 nm was measured by flow cytometry.

All statistical analyses were conducted with SPSS 22.0 (SPSS Inc., Chicago, IL). The values are presented as means ± SD. Differences between two groups were analyzed using Student's t-test, and the frequencies of two groups were compared using the chi-squared test.

MiR-193a-5p is upregulated in osteosarcoma

The expression of miR-193a-5p was investigated in 25 pairs of primary osteosarcoma and corresponding adjacent noncancerous tissues by qRT-PCR. The results showed that miR-193a-5p was expressed at significantly higher levels in the tumor tissues than in the corresponding adjacent noncancerous tissues (Figure 1A). Moreover, the level of miR-193a-5p in osteosarcoma cell lines (MG63, SJSA-1, SaOS-2 and U-2OS) was significantly higher than that in the normal human osteoblast hFOB1.19 cell line (Figure 1B). 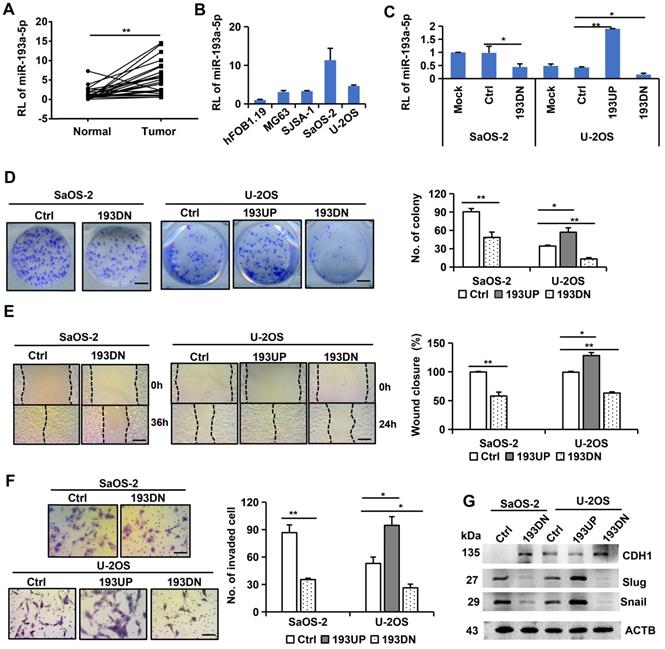 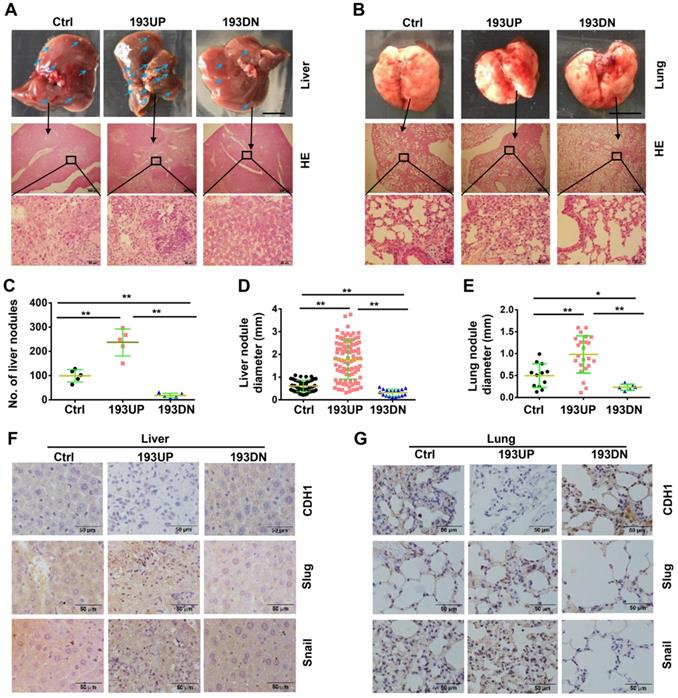 miR-193a-5p negatively regulates the expression of NCX2 gene. A. Western blotting was performed to detect the influence of miR-193a-5p on the expression of HLA-B and NCX2. B. Diagram of the binding between miR-193a-5p seed sequence and the 3′-UTR of NCX2. The mutated nucleotides in the pmirGLO-mtMRE construct were underlined. C. Each luciferase construct (pmirGLO-MRE, pmirGLO-mtMRE) was co-transfected with miR-193a-5p mimics or negative control (miR-NC) into HEK293 cells. At 24 h post-transfection, the luciferase activity was examined and normalized to Renilla luciferase activity. D. Western blotting was used to detect the expression of NCX2 in 6 pairs of osteosarcoma (T) and the matched adjacent non-cancerous (N) tissues. E. RT-qPCR was performed to detect the mRNA level of NCX2 in 25 pairs of osteosarcoma and the matched adjacent non-cancerous tissues. F-G. The correlation between NCX2 level and miR-193a-5p (or miR-193a-3p) in osteosarcoma tissues. 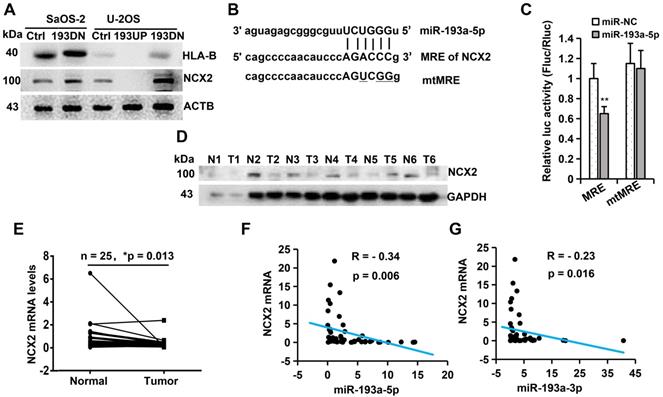 We then search the potential binding site (miRNA response element, MRE) of miR-193a-5p in the NCX2 and HLA-B genes by miRWalker, a comprehensive database for the prediction of MREs [31]. An MRE for miR-193a-5p was identified in the 3′- UTR of NCX2 (Figure 3B), but not in the 3′-UTR, 5′-UTR or coding sequence of the HLA-B gene. To confirm whether the predicted MRE in NCX2 could be recognized by miR-193a-5p, the wildtype or mutant MRE was cloned downstream of the firefly luciferase gene in the pmirGLO vector and cotransfected with miR-193a-5p mimics. Luciferase activity assays showed that miR-193a-5 significantly suppressed the luciferase activity of pmirGLO-MRE, but not that of pmirGLO-mtMRE (Figure 3C). These results suggest that NCX2 is a direct target of miR-193a-5p.

We further detected NCX2 expression in osteosarcoma tissues by qRT-PCR and Western blotting and found that both NCX2 mRNA and protein levels were significantly lower in osteosarcoma tissues than in the corresponding normal tissues (Figure 3D-E). Correlation analysis showed that NCX2 mRNA was negatively corelated with the levels of miR-193a-5p and miR-193a-3p (Figure 3F-G). Compared with miR-193a-5p, miR-193a-3p had a weaker association with NCX2, possibly because NCX2 is mainly regulated by pomiR-193a-5p. The above results indicated that miR-193a-5p recognized NCX2 mRNA and negatively regulated the expression of NCX2. 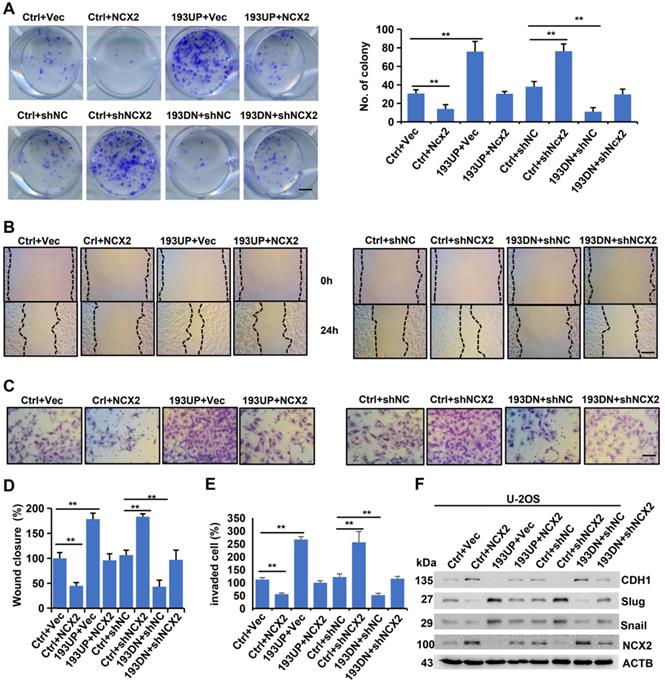 Moreover, we investigated whether NCX2 plays a role in the EMT process by affecting AKT phosphorylation. As shown in Figure 5E, the effects of NCX2 overexpression on the expression of EMT-related markers were suppressed by the AKT activator SC-79, but enhanced by the AKT inhibitor afuresertib. The above results suggest that NCX2 suppresses the EMT process by inactivating the Akt pathway.

Afuresertib is an oral AKT inhibitor with cytotoxic and antiproliferative activities against various kinds of cancer cells. The above results indicated that miR-193a-5p activates AKT by targeting NCX2. Therefore, we explored whether downregulation of miR-193a-5p enhances the effects of afuresertib treatment. In vitro assays showed that knockdown of miR-193a-5p decreased, while overexpression of miR-193a-5p increased, the IC50 value of afuresertib in SaOS-2 and U-2OS cells (Figure 6A-C). Then, a subcutaneous tumor model was generated for in vivo evaluation of the efficacy of antagomir-193a-5p (a chemically-modified single-stranded miR-193a-5p inhibitor) and afuresertib. The results showed that treatment with antagomir-193a-5p or afuresertib alone could suppress the growth of tumor and metastasis to both liver and lung in osteosarcoma xenograft mice, while the combination treatment had stronger anti-tumor effect (Figure 6D-J). 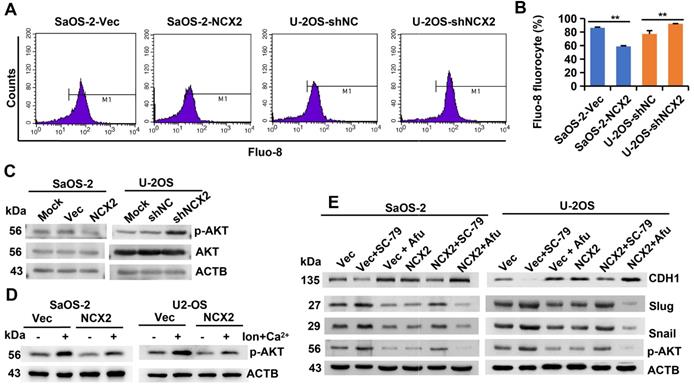 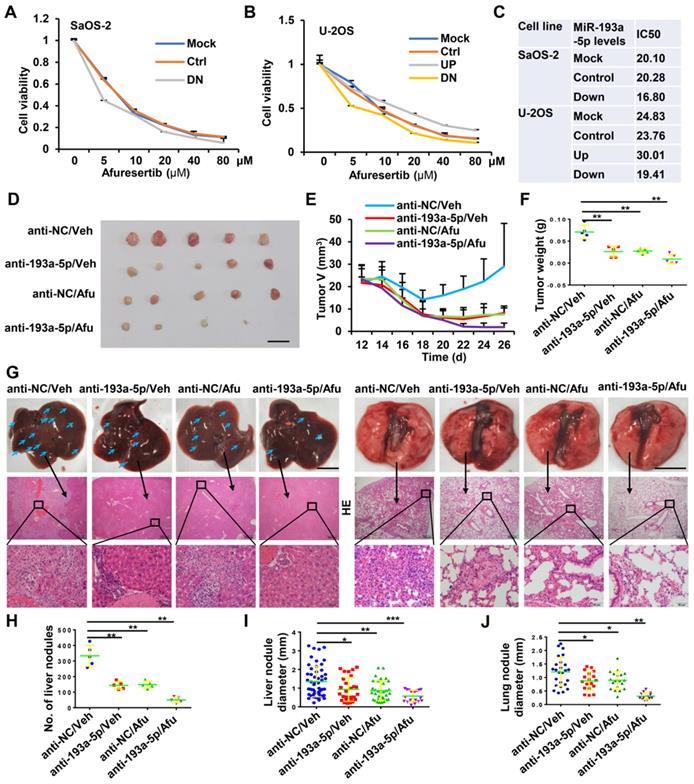 A schematic diagram illustrating the miR-193a-5p/NCX2/AKT axis in osteosarcoma. 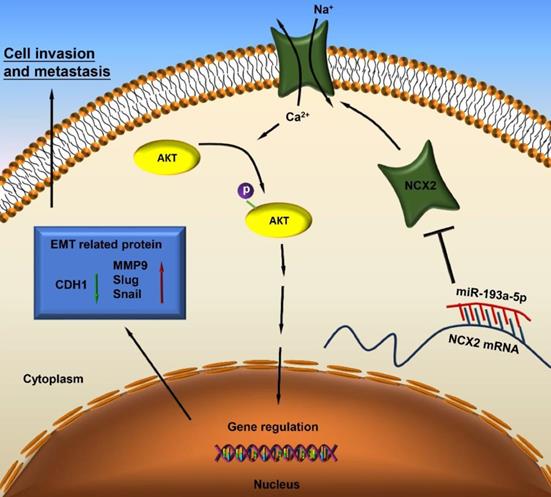 Based on our results, miR-193a-5p targets NCX2, while downregulation of NCX2 leads to AKT activation by increasing Ca2+ influx, thus facilitating EMT and metastasis of osteosarcoma (Figure 7).

AKT is overactivated in various cancers, and its inhibitors (such as afuresertib and ipatasertib) are promising drug candidates for cancer treatment [38]. However, the role of AKT inhibitor for treatment of osteosaroma is not clear. In this paper, afuresertib alone suppressed the growth of tumor in osteosarcoma xenograft mice, while the combination treatment with antagomir-193a-5p had stronger anti-tumor effect. Therefore, antagomir-193a-5p has therapeutic potential in the treatment of osteosarcoma.

In conclusion, we demonstrated that miR-193a-5p was upregulated in osteosarcoma tissues and promoted colony formation, migration, invasion, and EMT in vitro, as well as metastasis in vivo. Mechanistically, miR-193a-5p targeted NCX2, while NCX2 suppressed the EMT process by inactivating Ca2+-dependent AKT activation. Collectively, this study revealed a miR-193a-5p/NCX2/AKT signaling axis in the progression of osteosarcoma, which may provide a new therapeutic target for osteosarcoma treatment.

We would like to thank Shanghai Applied Protein Technology Co., Ltd. (APTBIO) for the technical support in proteome analysis. This study was supported by National Natural Science Foundation of China (No. 81902745), Hunan Provincial Research and Development Program in Key Areas (2019WK2071, 2020DK2003), and China Postdoctoral Science Foundation (No. 2021M693557).