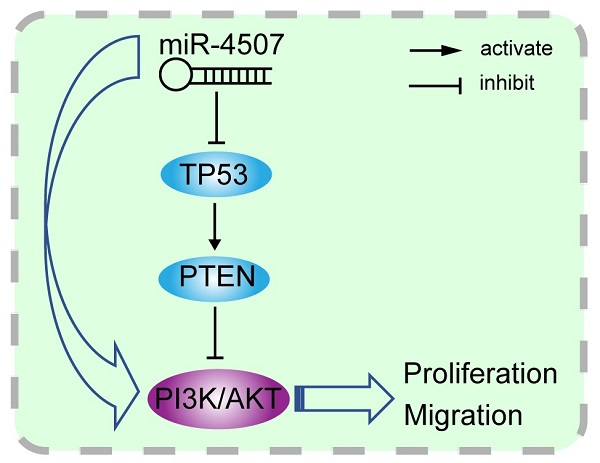 Lung cancer is a serious threat to human health due to its high morbidity and mortality. microRNAs (miRNAs) are involved in the tumorigenesis and progression of lung cancer. In this study, we elucidated the role of miRNA-4507 (miR-4507) in the pathogenesis of non‐small‐cell lung cancer (NSCLC). miR-4507 is found to be upregulated in NSCLC cells (A549, H460). MTT, 5-ethynyl-2'-deoxyuridine (EdU), wound healing, and transwell assays were performed to evaluate NSCLC cell proliferation and migration. The results demonstrated that miR-4507 inhibition significantly decrease the proliferation and migration of NSCLC cells. Subsequently, a luciferase activity assay was conducted to verify the regulation of the predicted gene target of miR-4507, namely, TP53. Mechanism experiments show that miR-4507 activates the PI3K/AKT signal. Further, we co-transfected miR-4507 mimics and TP53 plasmids and found that TP53 overexpression could recover the effects of miR-4507 mimics on proliferation, migration, and the PI3K/AKT signal activation. These results suggested that miR-4507 targets TP53 to facilitate the proliferation and migration of lung cancer cells through PI3K/AKT signal and that miR-4507 could serve as a potential target for NSCLC treatment.