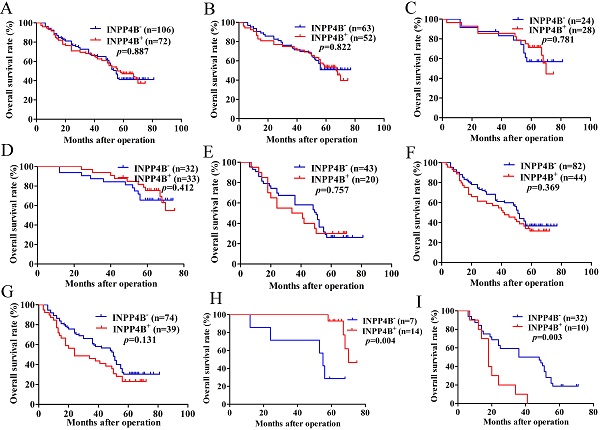 Inositol polyphosphate 4-phosphatase type II (INPP4B) negatively regulates PI3K-Akt signalling and plays diverse roles in different types of cancer, but its role in gastric cancer (GC) is still unknown. Our study aimed to investigate the function and clinical relevance of INPP4B in GC. INPP4B expression was detected in GC tissues and nontumour tissues. The effect of INPP4B on the phenotypic changes of AGS and BGC-823 cells was investigated in vitro. The activation of serum and glucocorticoid-regulated kinase 3 (SGK3) and AKT were used to evaluate the specific mechanistic function of INPP4B in GC cells. The messenger RNA (mRNA) and protein expression levels of INPP4B were decreased in GC tissues compared with nontumour tissues. INPP4B expression was associated with tumour-node-metastasis (TNM) stage and histopathological differentiation. In addition, high INPP4B expression in GC patients with large tumour size/low-undifferentiated/TNM's III-IV stage was correlated with a poor prognosis but it was correlated with a better prognosis in patients with small tumour size/high-moderate differentiated/TNM's I-II stage patients. In addition, INPP4B knockdown inhibited proliferation, clonal formation and migration and promoted cell apoptosis in vitro, while INPP4B overexpression led to the opposite effects. Mechanistically, we found that INPP4B overexpression enhanced the phosphorylation of SGK3 (p-SGK3) in AGS cells, whereas INPP4B knockdown enhanced the p-Akt level in BGC823 cells. These findings suggested that the expression of INPP4B in GC is lower than that in normal tissues. Based on stratification survival analysis and in vitro cell experiments, INPP4B may play dual roles as an oncogene and tumour suppressor gene in different tissue grades and clinical stages.