Urothelial carcinoma of the bladder (UCB) is the 10th most common cancer worldwide and the 13th leading cause of cancer-related deaths [1]. Radical cystectomy (RC) is recommended for muscle-invasive bladder cancer (MIBC) and certain aggressive phenotypes of non-MIBC (NMIBC). However, up to 70% of patients experience local or distant recurrence within two years after complete removal of the primary cancer [2]. Distant metastasis decreases life expectancy and requires systemic therapy. Therefore, identifying patients at higher risk of distant metastasis is important, especially among those who require RC. Preoperative renal insufficiency is associated with all-cause mortality in several malignancies [3]. A recent meta-analysis found that preoperative renal insufficiency is associated with a higher risk of upper tract urothelial carcinoma (UC) recurrence and mortality [4]. Two previous studies reported the effect of preoperative renal insufficiency on oncological outcomes in patients with bladder UC and upper urinary tract UC (UTUC) [5,6]. However, these previous studies were based on retrospective data from the 1990s to 2010s and may have been highly vulnerable to recall or sampling biases. Further, the clinical impact of renal insufficiency on metastasis-free survival (MFS) in cases of UCB treated with RC remains unclear.

This study was approved by the Seoul National University Hospital (SNUH) Institutional Review Board (IRB). Informed consent for academic use of the clinical data was obtained from each participant at the time of enrolment in the prospective registry [7]. For this ad-hoc study, the SNUH IRB approved the academic use of registry data focused on renal insufficiency and oncological outcomes after RC. All the study processes were performed in accordance with relevant guidelines and regulations.

For this analysis, we used data from the SNUH Prospectively Enrolled Registry for Urothelial Carcinoma treated with RC, a sub-cohort of the multidisciplinary genitourinary cancer registry of a high-volume tertiary center [7]. Patients who underwent RC between March 2016 and February 2021 at SNUH were evaluated. The inclusion criteria were as follows: patients older than 18 years and who underwent RC due to histologically confirmed MIBC or Bacille Calmette Guérin (BCG)-refractory NMIBC. Patients with non-UC on final pathological examination and those who underwent neoadjuvant chemotherapy were excluded (Figure 1). All patients underwent RC with standard pelvic lymph node dissection.

The preoperative glomerular filtration rate (GFR) was calculated using the Modification of Diet in Renal Disease equation (GFR=186.3 × serum creatinine level (mg/dL)-1.154 × age-0.203 × 0.742 (if female)) [8]. Patients were divided into two groups based on the preoperative GFR. Patients with a calculated GFR of <60 mL/min/1.73 m2 were assigned to the renal insufficiency group, and those with a calculated GFR of ≥60 mL/min/1.73 m2 were assigned to the control group. All the preoperative laboratory tests were performed within one month before RC. If the results of any laboratory tests were abnormal, we repeated those laboratory tests at the time of admission. Patient selection for RC followed current guidelines and recommendations, i.e., clinical T stage ≥2 or treatment-refractory cT1 [9]. High-risk patients, such as those with pathologic stage T3 or ≥N1, were treated with cisplatin-based adjuvant chemotherapy. Metastasis was assessed using computed tomography every six months for three years after RC and annually thereafter. If the patient had any unusual symptoms, we performed additional laboratory and imaging tests, including positron emission tomography.

The primary endpoint was MFS, while the secondary endpoints were OS and CSS within the follow-up period. Continuous variables were described as means (interquartile ranges), and categorical variables were described as frequencies (percentages). Continuous variables were compared using Student's t-test, and categorical variables were compared using the chi-square test or Fisher's exact test. Kaplan-Meier curves and log-rank tests were used to compare MFS, OS, and CSS of the two groups. Cox proportional hazard regression analysis was performed for MFS, OS, and CSS using known risk factors: age, pathologic T stage, pathologic N stage, sex, history of UTUC, and renal function. Patients were divided into three age groups (<65 years, 65-75 years, and >75 years). Statistical analyses were performed using Python 3.9.0 based on packages dependent on SciPy [10]. Statistical significance was set at p <0.05, and all reported p-values were two-sided.

Demographics of the renal insufficiency and control groups 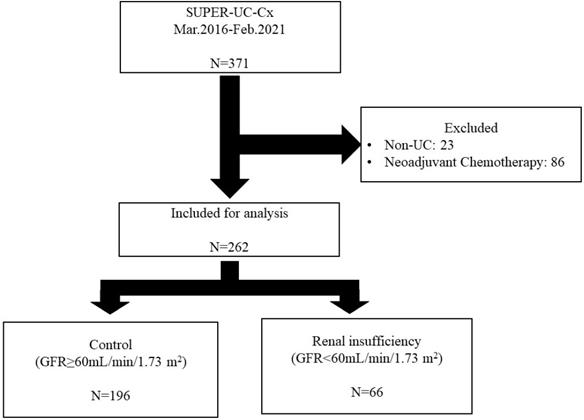 Kaplan-Meier curve for (A) metastasis-free survival, (B) overall survival, (C) and cancer-specific survival in the renal insufficiency and control groups.

Recurrence after RC is relatively common in patients with advanced bladder cancer [11]. Although most studies do not distinguish between local recurrence and metastasis, some studies have shown that up to 50% of patients experience distant metastasis after RC [11]. A recent study conducted by Park et al. [12] reported that 59.9% of patients with pathologic TanyN1-3M0 disease experienced metastasis within 3 years after RC. The 5-year survival rate of RC varies by initial presentation, from 77% for superficial cancer to 46% for MIBC [13]. However, the 5-year survival is notably decreased to less than 15% in patients with metastatic UC [14]. Therefore, careful patient stratification and intensive follow-up protocols for high-risk patients are particularly important. In this study, we found that renal insufficiency increases the risk of metastasis. We also identified pathologic T stage and N stage to be significantly associated with metastasis. We suggest that patients with these risk factors should be followed up more carefully for early identification of metastasis.

Renal insufficiency is associated with poor outcomes in UC patients in various ways. A well-established hypothesis suggests that chronic kidney disease (CKD) is a predictor of poor survival in cancer patients because decreased renal function makes the selection or therapeutic dosing of chemotherapeutic agents difficult [15]. Most chemotherapeutic agents are nephrotoxic; therefore, patients with advanced CKD experience a vicious cycle of decreasing renal function and decreasing therapeutic effects. Conversely, renal insufficiency can lead to the development of UC and promote the progression of other malignancies. Lin et al. [16] found a higher incidence of oral, colorectal, liver, blood, breast, renal, upper urinary tract, and bladder cancer in patients with end-stage renal disease who were undergoing dialysis than in healthy individuals. Leppert et al. [17] reported that CKD itself increased the risk of UC, although the risk of other malignancies was not significantly increased. A recent meta-analysis showed that postoperative CKD had a poor prognostic impact on UC recurrence and patient survival [4]. This study focused on the prognostic impact of preoperative renal insufficiency on MFS after RC in patients with UCB. Renal insufficiency was an independent prognostic factor for MFS (HR: 2.04, 95% CI: 1.07-3.87, p=0.03), although its prognostic impact on OS and CSS was not significant. Owing to a relatively short follow-up period and a limited number of patients, the proportion of deceased patients was only about 10% (31/265 patients) of all patients in this study, which is not enough to determine the prognostic impact of renal insufficiency on OS and CSS in this study. Further studies with a longer follow-up period are warranted; large population-based studies should also be conducted that apply the findings of this study.

The mechanism by which renal insufficiency affects MFS has not been clearly demonstrated and we did not examine it in this study. However, we suggest a potential mechanism of action, where renal insufficiency induces hypoxia and increases toxic agent-mediated cancer cell growth at metastatic sites. Recently, Soave et al. [18] showed that more than 25% of patients with RC have an increased risk of circulating tumor cells (CTCs), which are a potential source of metastasis [19]. CTCs in venous blood increase the likelihood of cancer cell migration to solid organs and the progression of metastasis under the proper conditions. In this study, patients with renal insufficiency tended to have lower hemoglobin levels, higher potassium levels, and higher uric acid levels than patients in the control group. Anemia is a well-known complication of CKD [20], and the hypoxia-inducible factor-mediated pathway plays an important role in metastasis [21]. Additionally, high uric acid is relatively common in patients with renal impairment [22], and this is a poor prognostic factor for CKD development [22] and cancer progression [23]. However, a better-designed study on CKD and metastasis is required to answer these questions.

This study has several limitations. Although we investigated the endpoints in a prospective cohort, we did not perform randomization; therefore, caution should be exercised before applying the results of this study in clinical settings. This study only contained data from a single institution; thus, external validation of the findings is needed. Another important limitation is that data for pre-operative hydronephrosis were not available in this study. Pre-operative hydronephrosis can impact both renal function and prognosis in cases of UCB [24]. Moreover, we did not provide a potential mechanism of action by which preoperative renal insufficiency promotes metastasis. Despite these limitations, this is the first study to reveal the effect of preoperative renal insufficiency on MFS after definitive treatment of bladder cancer in a prospective cohort. Well-designed randomized clinical trials and translational studies are needed to clarify the mechanism of action driving this phenomenon.

The data that support the findings of this study are available on request from the corresponding author, JHK. However, the data are not publicly available due to privacy and ethical issue of research participants.