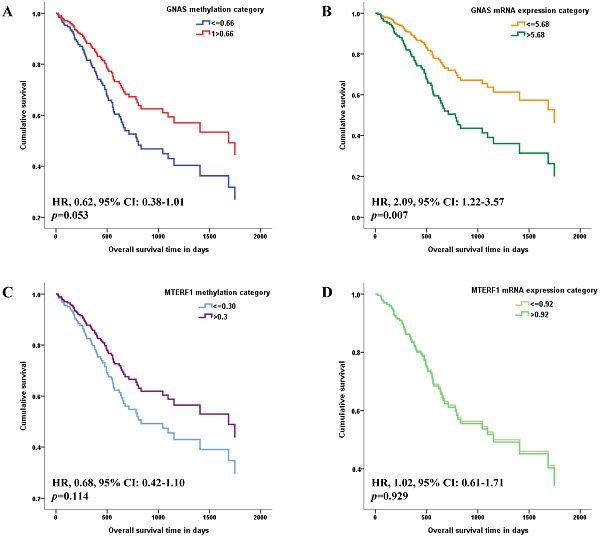 Methods: Five candidate H.pylori-associated aberrant methylation genes were selected from the previous genome-wide profiling panels and validated in blood leukocyte and gastric mucosa in multi-stages (case-control validation between H.pylori positive and negative subjects and self-control validation before and after anti-H.pylori treatment).

Conclusions: GNAS and MTERF1 methylation levels may be affected by H.pylori infection in gastric mucosa and blood leukocyte. GNAS may be involved in advanced stage of GC development, although the possible mechanism still needs further study in precancerous lesions.

According to the cancer statistics from GLOBOCAN 2018, 2.2 million new cancer cases were attributable to carcinogenic infections. Helicobacter pylori (H.pylori) is the most important infectious agents and responsible for 810 000 new cancer cases. High burden of infection-attributable cancer driven by H.pylori was observed in eastern Asia (480 000 cases), especially in China (340 000 cases) [1].

Evidences suggest that H.pylori-induced chronic inflammation and epigenetic alterations may serve as one of the most important mechanisms in the process of gastric carcinogenesis [2]. The degree of exposure to H.pylori infection may influence the accumulation of aberrant methylation in various genes, which produces an “epigenetic field of cancerization” in normal-appearing tissues. The severity of this field was found to be correlated with the predisposition to gastric cancer (GC) and recently was used to predict the risk of metachronous GC [3, 4].

Aberrant methylations in blood leukocyte DNA are considered as surrogate biomarkers for their easy accessibility and correlations with the risk of various cancers or endogenous and exogenous risk factors [5, 6]. For example, global hypomethylation (ALU, LINE1 and Sat2) [7, 8] and hypermethylation of specific genes (IGFII and TUSC3) [9, 10] were reported to be associated with GC or H.pylori infection. Our previous genome-wide profiling study has found a high correlation of methylation levels between blood leukocyte and matched gastric mucosa, which supports the methylation of blood leukocyte as a potential surrogate biomarker for the epigenetic alteration in gastric carcinogenesis. Furthermore, the panel of H.pylori-associated differentially methylated genes was preliminarily identified in blood leukocyte and in gastric tissue [11].

From the previous candidate H.pylori-associated aberrant methylation gene panel in blood leukocyte, our pilot validation found decreasing trends of GNAS and LTBR methylation levels after H.pylori eradication by denaturing high performance liquid chromatography (DHPLC) in a small sample size comparison [11]. Besides GNAS and LTBR, DKK3 was selected from the candidate panel according to literatures [11-13] for further validation in the present study. MTERF1 and HAUS5 were also selected from the candidate aberrant methylation panel overlapped between blood leukocyte and gastric tissue, in which the differentially methylated CpG sites were located both near CpG island and promoter regions [11].

Depending on the above selection strategy, the present multi-stage study validated the five candidate H.pylori-associated aberrant methylation genes by methylation specific real-time PCR in blood leukocyte as well as in gastric mucosa. We further evaluated the relationship between the potential non-invasive H.pylori-associated epigenetic biomarkers and precancerous gastric lesions. Possible clinical significance was also preliminarily investigated in GC using TCGA database.

A written informed consent was obtained from each subject. The study was approved by Institutional Review Board of Peking University Cancer Hospital (2015KT67).

The detailed procedure of endoscopy has been described elsewhere [16]. Briefly, gastric mucosa was examined by experienced gastroenterologist using video endoscopes (Olympus). At least two biopsies were obtained from less curve of antrum, one for pathological diagnosis, one for DNA extraction and methylation detection. The gastric biopsy specimens were reviewed blindly by two pathologists according to the criteria proposed by the Chinese Association of Gastric Cancer [17] and Updated Sydney System [18]. Each biopsy was diagnosed as normal, superficial gastritis (SG), chronic atrophic gastritis (CAG), intestinal metaplasia (IM) or dysplasia (DYS) based on the most severe histology.

The methylation levels of the five candidate genes were detected by quantitative methylation-specific PCR using a StepOne Real-Time PCR System (Applied Biosystems) with the primers and probes as described in Table S1. The 20μl PCR reaction mixture contained 1×TaqMan Fast Universal PCR Master Mix (Applied Biosystems), 0.9 mmol/L each of forward and reverse primers, 0.25 mmol/L each of probes, and 20 ng of DNA at the following conditions: 95 °C for 20 seconds, followed by 40 cycles at 95 °C for one seconds, and 60 °C for 30 seconds. The efficiencies of all the genes PCR amplification were confirmed as nearly 100%. To normalize the input DNA, ACTB was used as the reference. The methylation levels of the candidate genes were calculated by dividing target gene/ACTB ratio of a sample by the target genes/ACTB ratio of positive control DNA treated by CpG methyltransferase (M.Sssl).

GNAS and MTERF1 methylation and mRNA expression in TCGA data

Because of the lack of GC cases and mRNA expression in our multi-stage validation, we accessed TCGA stomach cancer study data (http://www.xenabrowser.net) for the methylation and mRNA expression levels of GNAS and MTERF1 in GC cases. A total of 11 CpG sites in the promoter region of GNAS (from cg19640589 to cg21625881) and 15 CpG sites in MTERF1 (from cg10872641 to cg22709100) were selected from the Illumina HumanMethylation 450 DNA methylation data. The mRNA expression data were retrieved from Illumina HiSeq RNA-SeqV2 platform and log2 (RPKM+1) transformed. Other relevant clinical information was obtained including age, gender, pathological stage, H.pylori infection, targeted molecular therapy and radiation therapy.

Characteristics of the subjects for multi-stage validation

For the two-step self-control validation, the distributions of age, gender, cigarette smoking, alcohol drinking and baseline pathology for the participants are shown in Table S2. No statistical differences were found between successful and unsuccessful treatment groups both in preliminary and secondary self-control validations (all p>0.05). For case-control validation, there are higher frequencies of advanced gastric lesions (CAG and IM/DYS) in H.pylori positive group compared with negative group (17.0%, 40.4% v.s. 8.5%, 12.8%, p=0.001), although no differences were found in age, gender, cigarette smoking and alcohol drinking (Table S3).

† Wilcoxon Singed Ranks Test, comparing the methylation level before and after anti-H.pylori treatment.

The associations between aberrant methylation genes and gastric lesions

We further investigated the relationship of the aberrant methylation genes with gastric lesions by combining the 94 case-control subjects and the 114 baseline subjects of the secondary self-control validation (Table 5). The total subjects consist of 103 SG, 74 CAG and 31 IM/DYS. In the blood leukocyte samples, GNAS methylation median showed decreasing trend with the severity of gastric lesions from 52.81% in SG to 46.20% in IM/DYS, p=0.053. In the 144 subjects possessing gastric mucosa samples, GNAS methylation median was also marginally decreased from 55.68% in SG to 37.87% in IM/DYS, p=0.053. While, MTERF1 methylation levels showed no difference in various lesion groups (p=0.407 in blood leukocyte and 0.547 in gastric mucosa). Multivariate unconditional logistic regression found no significant relationship between advanced gastric lesions (CAG/IM/DYS) and GNAS or MTERF1 methylation in blood leukocyte or gastric mucosa, all p>0.05 (Table S4).

Depending on our previous genome-wide methylation profiles prior to and after anti-H.pylori treatment, the present study further validated that GNAS and MTERF1 methylation levels in blood leukocyte and gastric mucosa are correlated, and may be affected by H.pylori infection. Especially, GNAS may also be involved in advanced stage of GC development.

† Wilcoxon Singed Ranks Test, comparing the methylation level before and after anti-H.pylori treatment. 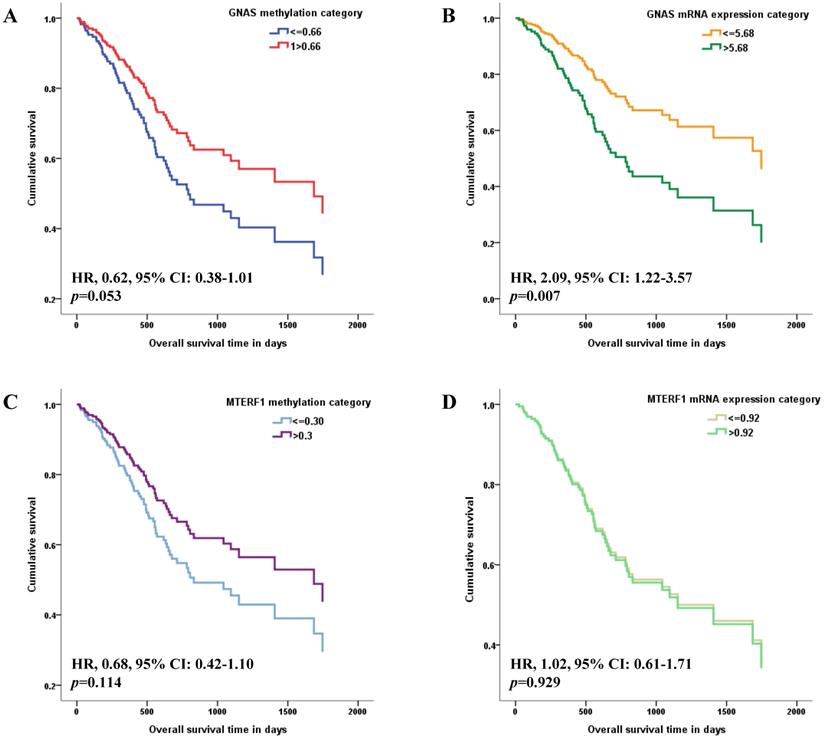 In the preliminary self-control validation, the five candidate aberrant methylation genes were detected by quantitative methylation-specific PCR in 18 successful and eight unsuccessful H.pylori eradiation cases. Although the change of LTBR methylation shows no statistical significance, the methylation alterations of DKK3, GNAS, MTERF1 and HAUS5 are consistent with the previous methylation chip analysis [11], which suggests the high accuracy of our validation method.

The levels of aberrant methylation burden induced by H.pylori may increase with the period and density of the infection and finally accumulate in precancerous tissues producing an epigenetic field defect for cancerization [26]. Our validation identified that aberrant GNAS and MTERF1 methylation alterations can be induced by H.pylori infection. However, no independent relationships were found between GNAS or MTERF1 methylation levels and advanced gastric lesions (such as CAG or IM/DYS) in the present study. Further confirmation in a larger number of precancerous lesion subjects is still needed.

Although no GC patients were included in our case-control and self-control validations, we accessed TCGA data and found inverse relationships between promoter methylation and mRNA expression for GNAS and MTERF1 in GC tissues. Our result suggests that promoter methylation of GNAS and MTERF1 may serve as one of the mechanisms for expression regulation, although the detailed functions still need further investigation. Worse overall GC survival was found to be associated with higher expression of GNAS in GC patients, which may imply an important role of GNAS expression activation in the advanced stage of GC development. The hypomethylation induced by H.pylori may serve as the epigenetic prerequisite and provide a potential alternation to promote GNAS expression in addition to the well-studied activating mutations via the Wnt/β-catenin pathway or the ERK1/2 MAPK pathway [27, 28]. The correlated methylation alterations of GNAS in blood leukocyte and gastric mucosa may also suggest a potential non-invasive indicator for gastric epigenetic regulation, while the clinical significance still needs further validation.

The major strengths of our study lie in complementary design of combining case-control and self-control validations for H.pylori-associated differential methylation genes selected from the previous methylation chip screening. The significant H.pylori-associated methylation alterations were verified in blood leukocyte as well as in gastric mucosa, which may provide potential non-invasive indicator for gastric epigenetic regulation. A limitation in our study is the lack of GC subjects when we investigated the aberrant methylation status in various gastric lesions. However, TCGA database can provide us helpful information about gene methylation and expression in GC tissue to support our validation results.

For the five candidate methylation genes selected from our previous methylation chip screening, our case-control and self-control validations confirmed that GNAS and MTERF1 methylation levels may be affected by H.pylori infection both in gastric mucosa and in blood leukocyte. Methylation of GNAS may serve as one of the mechanisms for expression regulation. GNAS may be involved in advanced stage of GC development, although the possible mechanism still needs further study in precancerous lesions.