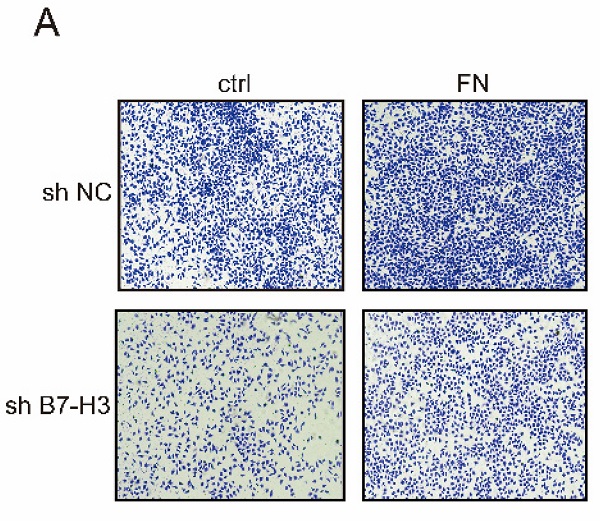 Anti-apoptosis has been widely accepted as a hallmark of malignancy. B7-H3, a type I transmembrane protein, plays a key role in anti-apoptosis and immune escape, but its regulation during cancer development remains unclear. To investigate how the effect of anti-apoptosis is regulated by B7-H3 in gastric cancer, we stably knocked down B7-H3 gene by shRNA in MGC-803 and MKN-45 cells. The correlation between B7-H3 and Fibronectin (FN) expression were investigated by bioinformatics in public data from TCGA (The Cancer Genome Atlas). Here, we reported that B7-H3 expression is positively correlated with FN in clinical gastric cancer samples, and B7-H3 promoted adhesion and inhibited apoptosis of gastric cancer cell through an FN-dependent pathway. Mechanistically, B7-H3 interacted with FN and subsequently activated PI3K/AKT signaling pathway, a critical mediator of oncogenic signaling. In addition, exogenous FN could inhibit the expression of pro-apoptosis-related proteins such as Caspase 3, Caspase 8, Caspase 9, Bax , p53, Apaf-1 and Cleaved PARP, and upregulated the levels of signal molecule p-PI3K, p-AKT and anti-apoptotic proteins Bcl-2 in B7-H3high group, as compared with those in B7-H3low group. In conclusion, we here for the first time revealed that B7-H3 inhibits apoptosis of gastric cancer cell through regulation of FN-mediated PI3K/AKT signaling pathways.