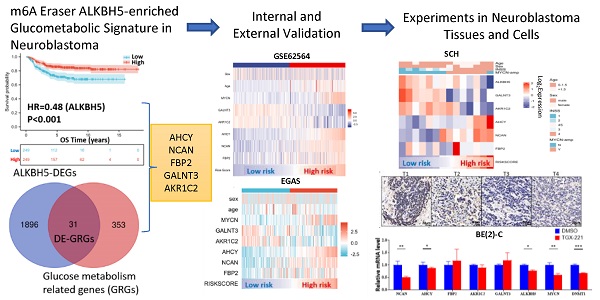 Background: Neuroblastoma (NB) is a pediatric cancer occurring in the peripheral nervous system. A demethylase, alkylation repair homolog protein 5 (ALKBH5), is one type of N6-methyladenosine (m6A) eraser that plays a tumor-suppressive role in a variety of cancers. The significance of carbohydrate metabolism in cancer has been intensively investigated over the years, but the correlation between ALKBH5 and glucose metabolism in NB remains to be elucidated.

Results: ALKBH5 was significantly correlated with better overall survival (OS) in NB patients, and gene set enrichment analysis (GSEA) showed its enrichment in GO/ KEGG terms regarding glucose metabolism. 27 of the 31 DE-GRGs were included in the LASSO screen after the univariate analysis. A prognostic glucometabolic model including AHCY, NCAN, FBP2, GALNT3 and AKR1C2 was established with the internal and external validation with biological experiments: the high-risk subtype compared to the low-risk subtype showed oncogenic and MYCN-related malignancy, glucometabolic dysregulation, poor prognosis and immunosuppression. TGX-221 was predicted to be a potential therapeutic drug and validated to suppress NB oncogenes including MYCN, AHCY and NCAN and immunosuppressive DNMT1 in NB cells.

Conclusion: ALKBH5 was closely related to glucometabolic processes, and our prognostic model had high application value in predicting & assessing the OS of NB patients, and even served potential drug targets.