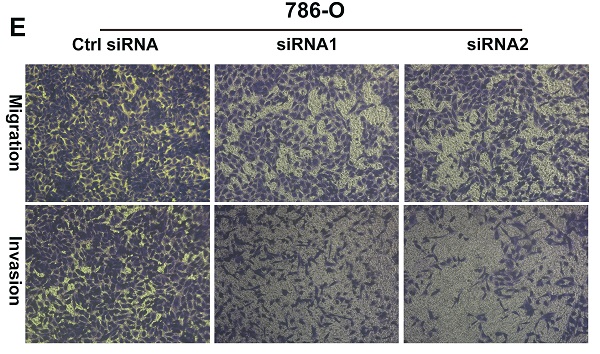 Methods: The Cancer Genome Atlas Kidney Clear Cell Carcinoma (TCGA-KIRC) database was used to investigate the association between ORC6 expression and clinicopathological parameters. Furthermore, the expression level of ORC6 was determined in human RCC tissues and cell lines by western blot and PCR. Receiver operating characteristics curves and Kaplan-Meier curves were performed to assess the diagnostic and prognostic value of ORC6 in RCC.

Results: High expression of ORC6 predicted shorter overall survival (OS) (P<0.0001) and acted as an independent prognostic factor. ORC6 could distinguish the tumor from the normal patient (area under the curve=0.8827, P<0.0001). The expression of ORC6 was associated with the P53 signaling pathway, cell cycle, and DNA replication.

Conclusion: ORC6 could serve as a useful diagnostic and prognostic biomarker and a potential therapeutic target for ccRCC.

Clear cell renal cell carcinoma (ccRCC) accounts for ~80% of all diagnosed renal cell carcinoma (RCC), which is the most familiar malignancy of the adult kidney; in 2019, it is estimated that there are 14770 deaths and 73820 new cases of kidney malignancy [1, 2]. Treatments of RCC vary a lot according to clinical staging; when the tumor is localized, patients could receive partial or radical nephrectomy; once the patients develop distant metastasis, chance of radical surgical operation is lost; timely diagnosis and treatment are crucial [3, 4]. Although recent advances have been made in targeted therapies, patients still develop poor prognosis because of the secondary drug resistance [5, 6]. Therefore, it is urgent and meaningful to investigate novel effective prognostic biomarker and elucidate underlying molecular mechanisms.

The origin recognition complex (ORC) is a highly conserved heterohexameric protein complex that associates with DNA at or near sites of initiation of DNA replication [7]. All six ORC subunits are essential for initiation of DNA replication [8], and ORC may be involved in regulation of gene expression in response to stress [9]. Modification of one or more of the six ORC subunits may be responsible for its inactivation during S phase [10]. The roles of ORCs have been extensively investigated in both yeast and Drosophila [11], but information on human cancer is limited. To the best of our knowledge, the involvement of ORCs in ccRCC remains unknown.

In this study, we aimed to investigate the correlation of ORCs expression with clinicopathological parameters and patient survival in TCGA database. Experimental research in vitro revealed that knockdown ORC6 impaired malignancy of ccRCC. Our study demonstrated that ORC6 plays an oncogenic role and overexpression of ORC6 reflects poor prognosis. These findings showed that ORC6 may be a potential novel biomarker and target for better treatment in the future.

The Cancer Genome Atlas database of Kidney Clear Cell Carcinoma (TCGA-KIRC) comprises total 611 samples and 539 patients (https://tcga-data.nci.nih.gov/tcga/) [12]. Surgical specimens of ccRCC patients who performed partial or radical nephrectomy were collected from the Department of Urology, the First Affiliated Hospital of Nanchang University between 2016 and 2020. Besides, the patients in the present study did not receive any adjuvant therapy before surgery and written informed consent was provided. The study methodologies conformed to the standards set by the Declaration of Helsinki and approved by the ethics committee of The First Affiliated Hospital of Nanchang University. Corresponding clinical pathological information of 50 pairs of patients was presented in Supplementary Table 1.

Cell and tissue RNA was extracted using TRizol reagent (Thermo Fisher Scientific, Inc.). The concentration and purity of total RNA were detected by a NanoDrop 2000 spectrophotometer (NanoDrop Technologies; Thermo Fisher Scientific, Inc.). Then, total RNA was reverse transcribed to cDNA using a PrimeScript RT reagent Kit (Takara Bio, Inc.). RT-qPCR was performed according to the manufacturer's instructions (LightCycler 480II; Roche, Basel, Switzerland). Relative expression was calculated by the -2ΔΔCt method and GAPDH was used as an endogenous control. The PCR primers were chemically synthesized by TSINGKE.

We followed the methods of Qiufeng Pan et al. 2020[16]. Cells and tissues were lysed in a protein lysis system including PMSF (Wuhan Boster Biological Technology, Ltd, Wuhan, China), protease inhibitor cocktail (Roche Diagnostics, Indianapolis, IN, USA), and RIPA buffer (Beyotime Institute of Biotechnology). Protein concentration was measured by the BCA kit (Beyotime Institute of Biotechnology). A total of 30μg proteins were presented and separated in 10% SDS-PAGE. Then, the gel system was transferred to polyvinylidene fluoride (PVDF) membranes (EMD Millipore, Bedford, MA, USA) for 90 mins at 90 V, after which the PVDF membrane was blocked in 5% nonfat milk dissolved in PBS for 1 h and then incubated with antibodies against ORC6 (1:1,000; A5426; Abclonal Biotec Co., Ltd) and β-actin (1:3,000; ab8226; Abcam Co., Ltd) at 4°C overnight. The next day, the membrane was washed and incubated with secondary antibodies (1:3,000; GB23303; Servicebio, Inc.) for 2 h at room temperature. Finally, the proteins were visualized with ChemiDoc-XRS+ (Bio-Rad Laboratories, Inc., Hercules, CA, USA).

48h prior to the experiment, the 786-O cells was transfected with Ctrl-siRNA or siRNA. Cells were plated in 6-well culture plates in equal numbers. Vertical wounds were made with 10µl pipette tips, cell confluence reached approximately 95%, and the image were saved at 2, 12, and 24h. As for migration, and invasion assays, we also followed the methods of Qiufeng Pan et al 2020[16]. Cells were cultivated in DMEM without serum for 6-8 h to starve the cells before the migration and invasion assays. In this study, 24-well transwell chambers (Corning Incorporated, Corning, NY, USA) containing 8-μm membrane filters were used. Cells (1x104) in 200 µl of serum-free medium were added into the upper chamber, whereas cells (2x104) were inoculated into the upper chamber, which was pre-coated with Matrigel (BD, Franklin Lakes, USA) for invasion assay. Moreover, complete medium with 10% FBS was added to the bottom chamber. Incubation at 37˚C for 24 h, cells were fixed with 100% methanol for 10 mins, then stained with 0.05% crystal violet for 30 min at room temperature. Finally, five random fields were counted under a microscope (Olympus CX41-32C02; Olympus Corporation, Tokyo, Japan) at 100x magnification. Three independent experiments were conducted repeatedly.

Statistical analysis was carried out by GraphPad Prism (version 7.0; GraphPad Software) and SPSS Statistics (version 22.0; IBM Corp.). Student's t-test was used to assess the difference in ORC6 expression between two groups; Pearson's χ2 test was used to evaluate the correlation between ORC6 expression and clinicopathological parameters of patients with ccRCC. The Kaplan-Meier (KM) curve evaluated patients' survival information and compared with Log-rank test; the Cox proportional hazard regression model was used to perform univariate and multivariate analysis. Data is shown as the mean ± SD. P<0.05 was regarded as significant.

3.2. Prognostic and diagnostic significance of ORC family in ccRCC

3.5. ORC6 served as a diagnostic factor for ccRCC subgroup patients 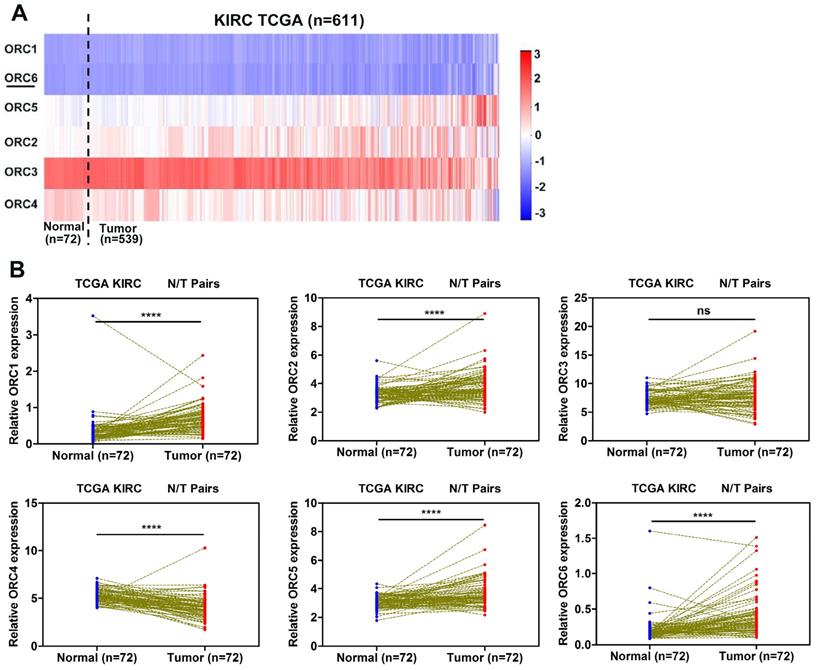 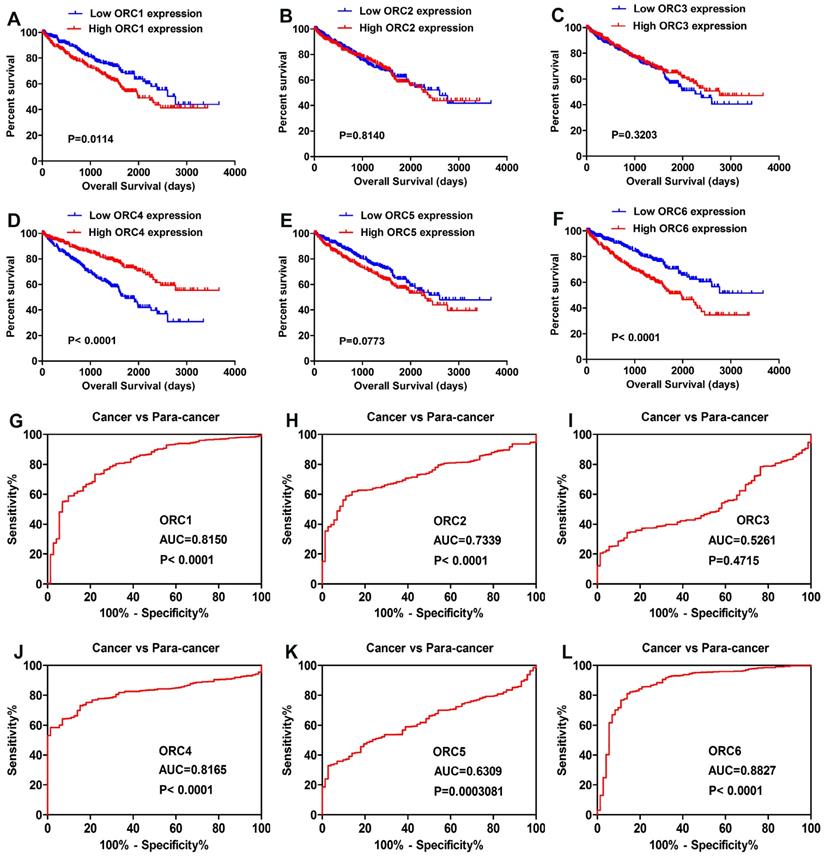 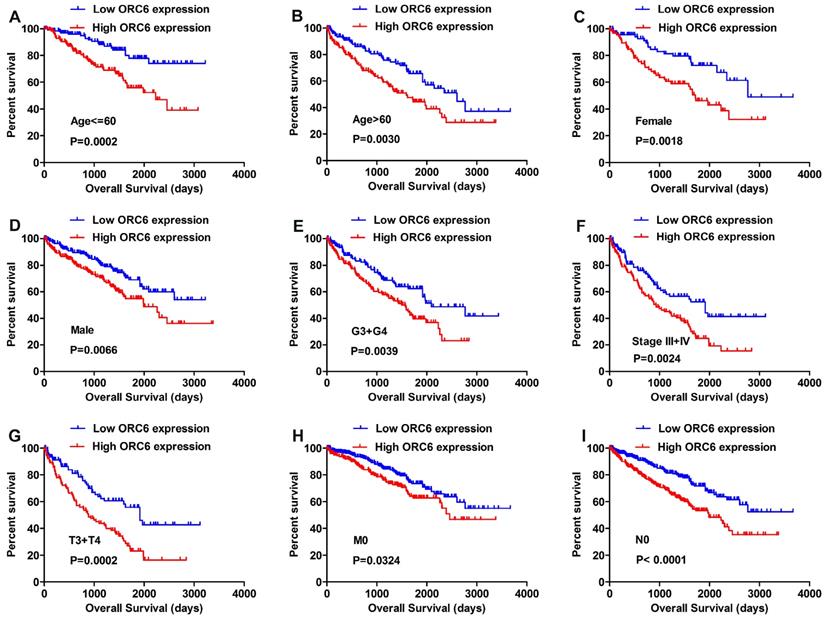 3.7. Upregulation of ORC6 was further verified in ccRCC cells and tissues

3.8. Pathway and biological pathogenesis of ORC6 in ccRCC

Based on above results, we were eager to know how ORC6 drived ccRCC progression. Then we performed GSEA analysis in TCGA database and retrieved the “STRING” database. The results revealed that ORC6 expression was correlated with gene signatures of cell cycle, DNA replication, and P53 signaling pathway (Fig. 7A-C). Moreover, many proteins interacted with ORC6 including ORC family, MCM family, and CDC family (Fig. 7D).

3.9. Knockdown of ORC6 impaired malignancy of ccRCC in vitro 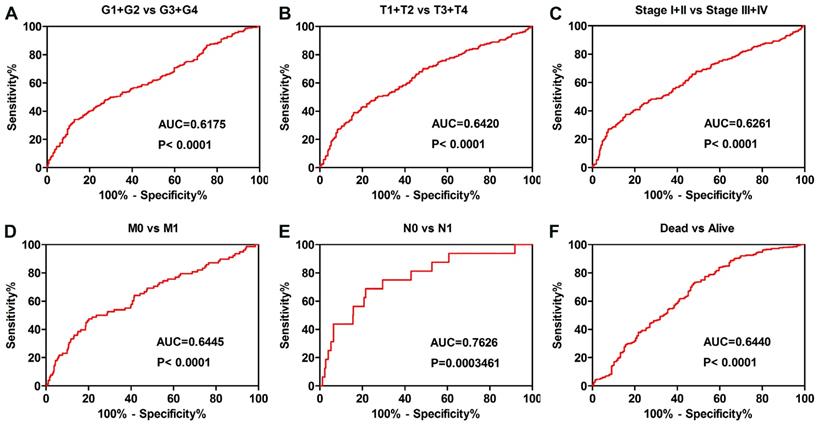 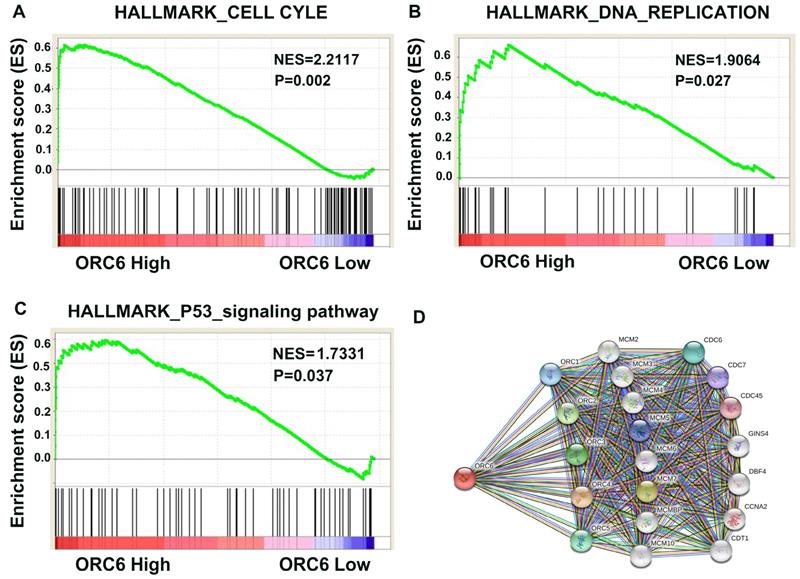 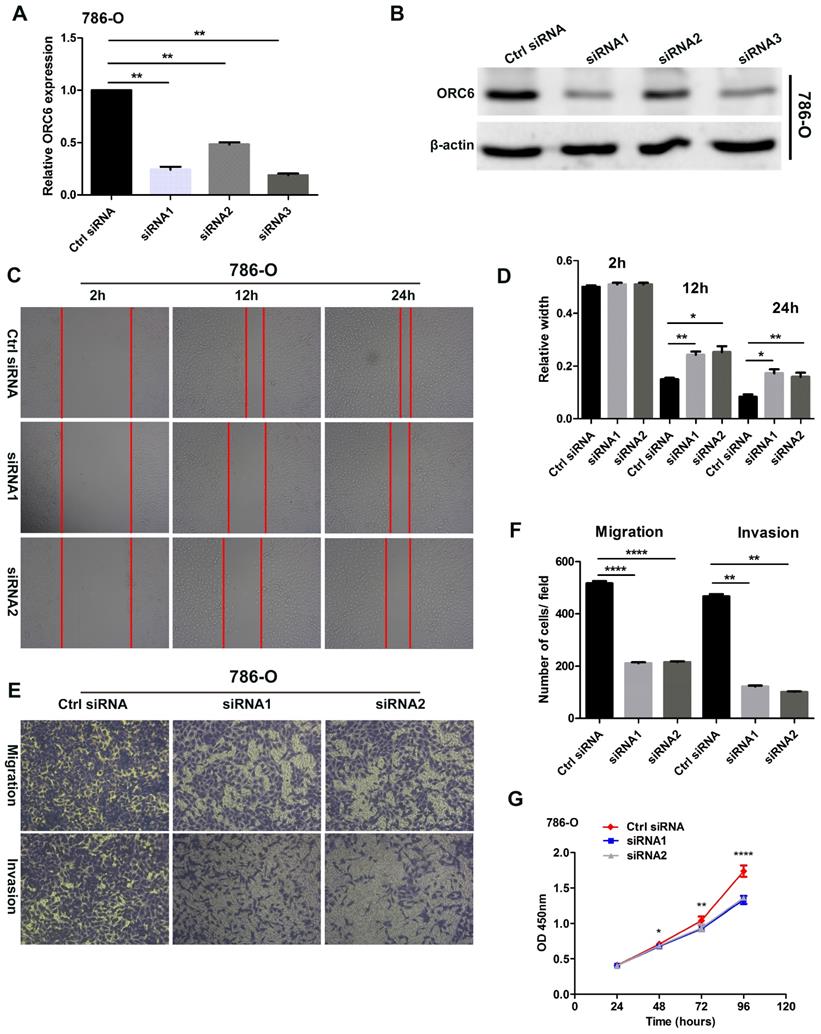 Clear cell renal cell carcinoma (ccRCC) is a highly heterogeneous disease, exhibiting high invasiveness and metastasis propensity [17]. Exploring novel effective biomarker and molecular mechanism in tumor progression may contribute to assessing and managing patients. The origin recognition complex (ORC), a six-protein complex, binds replication origin DNA, recruits other initiation factors and facilitates loading of the DNA helicase [7]. ORC6, however, appears no structural similarity to the other ORC proteins, and is the only ORC subunit not required for DNA binding [18, 19]. Nevertheless, to our knowledge, little is known about how ORC6 is involved in ccRCC pathogenesis.

Supriya G Prasanth et al. implicated that silencing of ORC6 caused a decrease in cell proliferation and increased cell death, and that ORC6 as an essential gene that coordinated chromosome replication and segregation with cytokinesis [20]. Shuyan Chen et al. demonstrated that lacking ORC6 inhibits the interacting with Cdt1 and loading the Mcm2-7 helicase onto origin DNA, thus hindering the DNA replication initiation [21]. Furthermore, in human colon cancer cells, Etsuko Shibata et al. reported that cells lacking detectable ORC1, ORC2 or ORC5 still grow, recruit MCM2-7 and initiates DNA replication; this implied that ORC1 or ORC2 or ORC5 seems dispensable to DNA replication [22]. In pancreatic cancer, Polo-like kinase 1 phosphorylation of ORC2 maintains DNA replication on gemcitabine treatment [23]. The present results first indicated that ORC6 was significantly upregulated in ccRCC. Interestingly, unlike ORC1-5, ORC6 could acted as an independent prognostic factor; combined with previous researches, we would imagine ORC6 may exert an irreplaceable influence on DNA replication. In our study, ORC3 expression showed no difference between normal and tumor tissue, it may play a minor role in DNA replication of ccRCC. However, further experiments are needed to verify them in ccRCC.

Elaine J. Gavin et al. first demonstrated that the expression levels of ORC6 were significantly elevated in colorectal cancer in 2008, which is consistent with the present findings in ccRCC [24]. The present study observed the mRNA expression level of ORC6 was overexpressed in 72 ccRCC tumor tissues compared with in normal tissues. The expression of ORC6 was further validated in clinical ccRCC samples and cancer cells. Moreover, we found ORC6 expression was closely correlated with various cliniocopathological parameters. ORC6 may be considered a diagnostic biomarker and its expression levels tended to increase with increasing tumor stage and grade. Furthermore, the present study indicated that knockdown of ORC6 with small interfering RNA inhibited ccRCC cell wound healing ability, migration, and invasion in vitro. Moreover, ORC6 promoted cell proliferation; 96 hours after ORC6 knockdown, the proliferation rate of 786-O cells was significantly decreased. These results indicated that ORC6 serve as an oncogene, playing an important role in ccRCC.

To the best of our knowledge, the present study is the first study establishing the role of ORC6 in ccRCC tumorigenesis and progression. Our results indicated that ORC6 may be treated a potential diagnostic and prognostic biomarker for patients with ccRCC, and that ORC6 knockdown suppressed malignancy of ccRCC in vitro. However, several limitations of this study should be addressed; the specific cooperation manner of ORC6 that initiates DNA replication in ccRCC remains unsolved; the exact underlying mechanism by which ORC6 promotes ccRCC progression was not fully investigated. Therefore, we aim to explore the molecular mechanism underlying ORC6 overexpression and its associated signaling pathways in future studies.

In summary, our study demonstrated that ORC6 plays an oncogenic role and overexpression of ORC6 reflects poor prognosis in ccRCC. ORC6 may be a potential novel therapeutic target for ccRCC in the future.

This research was supported by the Natural Science Foundation of China (grant number 81860454) and Jiangxi Provincial Science and Technology Program (grant number 20181BAB205053).