Background: Our previous study has shown that Da0324, a curcumin analog, exhibited significantly improved stability and antitumor activity. However, the molecular mechanisms of action of Da0324 remain poorly understood. Long non-coding RNA (lncRNA) has been shown to play a key role in tumor progression. Here, we aim to investigate the molecular mechanisms underlying the anti-cancer activity of Da0324 by regulating the lncRNA HOTAIRM1.

Methods: Gastric cancer cell lines were treated with Da0324 and/or transfected with lentiviral vector expressing HOTAIRM1 shRNA, and/or miR-29b-1-5p mimics and/or small interference RNA (siRNA) against PHLPP1, or HOTAIRM1 siRNA or lentiviral vector expressing HOTAIRM1, as needed. The expression of HOTAIRM1, miR-29b-1-5p and PHLPP1 in GC cells was determined by Real-Time PCR. Cell growth was examined by CCK-8 assay and colony formation assay in vitro. The targeted relationship between HOTAIRM1 and miR-29b-1-5p was verified by luciferase reporter gene assay. PHLPP1 protein expression was examined by Western blotting.

Conclusions: Our data suggest that Da0324 exerts antitumor activity by regulating HOTAIRM1/miR-29b-1-5p/PHLPP1 axis in GC cells, and provide new insights into the anti-cancer mechanism of Da0324.

Gastric cancer (GC) is one of the most common cancers in the world [1]. In China, it is the second most common cancer and the third leading cause of cancer-related deaths [1-3]. Because of the lack of specific symptoms, most patients with GC are diagnosed in the advanced stage at the time of diagnosis, resulting in poor prognosis [4-6]. Although advances in surgical treatment and chemotherapy have improved GC outcomes in recent decades, the prognosis is still unsatisfactory [7-9]. Therefore, further efforts are needed to search for new alternative therapies and improve the efficacy of comprehensive treatment strategies in GC.

Since the severe side effects of chemotherapy affects cancer treatment [10, 11], more and more researches are focusing on the anti-cancer properties of natural products, which may lead to the discovery of drugs that are more effective in cancer treatment and have fewer side effects [12]. As an active component extracted from the spice turmeric, curcumin is widely used as a colorant and spice in food [13]. Curcumin has anti-oxidant, anti-inflammatory, anti-apoptotic and anti-cancer properties, so more and more researchers are paying attention to it [14, 15]. Due to the shortcomings of using curcumin as an anticancer agent, such as its poor water solubility, which limits its oral bioavailability, scientists have developed a variety of strategies to overcome the existing shortcomings [16]. One strategy to address the poor water solubility is to use nanoparticle technology to improve bioavailability and cellular uptake [17-19]. In our preceding studies, the strategy to overcome the defects was to synthesize the curcumin analog Da0324. Our previous study showed that Da0324 is more stable than curcumin both in phosphate buffer and culture medium [2]. The half-life of elimination of Da0324 in culture medium reaches 2.6 h which is longer than that of curcumin (0.9 h). Both of Da0324 and curcumin reveal toxicity to the GC cells. But the half maximal inhibitory concentration (IC50) value at 48 h is lower than 5 μM in most GC cells which mean the toxicity of Da0324 is much stronger than curcumin [2]. Da0324 exhibited excellent target selectivity by inhibiting the activation of NF-κB in GC cells and had low toxicity to normal gastric mucosal epithelial cells [2]. Da0324 also activated P53 by down-regulating LINC01021 to exert anti-tumor activity against GC [20]. Nevertheless, there are still knowledge gaps in understanding the molecular mechanisms involved in the cytotoxicity of Da0324 against GC. Therefore, it is very important to investigate the molecular mechanism of inhibition of gastric cancer by Da0324.

To date, there is increasing evidence that non-coding RNAs (ncRNAs) are involved as important regulators in various physiological and pathological cellular processes [21, 22]. Long non-coding RNA (lncRNA) is a ribonucleotide chain, a group of ncRNAs longer than 200 nucleotides [23]. There is ample evidence that lncRNA plays an important role in regulating cancer cell proliferation, apoptosis and metastasis [24, 25]. One of the functional mechanisms of lncRNAs is to act as competitive endogenous RNAs (ceRNAs), which compete for microRNAs (miRNAs) binding to increase the expression of miRNAs-targeted mRNAs [26]. LncRNA HOTAIRM1 has been reported to play an important role in the progression of cancer [27, 28]. Li et al. reported that lncRNA HOTAIRM1 functions as ceRNA of miR-107 and regulates proliferation and invasion in papillary thyroid cancer [27]. A recent study also indicated that HOTAIRM1 was downregulated in GC. It regulated the development of GC through miR-17-5p, while upregulation of HOTAIRM1 inhibited the proliferation and migration of GC cells [28].

Here, we aimed to investigate the molecular mechanisms underlying the anti-cancer effect of Da0324 through regulation of HOTAIRM1. Our results revealed that Da0324 treatment upregulated HOTAIRM1, which increased PHLPP1 expression by sponging miR-29b-1-5p in GC cells.

The high-throughput sequencing assay was carried out as previously described [20].

The nucleus and cytoplasm were separated using the PARIS™ Kit (Thermo Fisher Scientific). According to the manufacturer's instructions, cells were suspended in cell separation buffer. RNA was then extracted and qRT-PCR analysis was conducted to detect the localization of HOTAIRM1. GAPDH and U6 served as control transcripts for cytoplasmic and nuclear RNA, respectively.

CCK-8 assay (Dojondo Laboratories, Kumamoto, Japan) was used to evaluate cell viability. Cells (5000/well) were seeded in a 96-well plates, 10 μL of CCK-8 solution was added into each well at indicated time point and incubated for 2 h. The absorbance at 450 nm was measured using microplate reader.

The transfected or Da0324-treated cells were cultured in six-well plates at a density of 800 cells/well and incubated at 37 °C for 2 weeks. Then, the cells were fixed with 4% paraformaldehyde, stained with crystal violet, and counted under a microscope.

The binding site of miR-29b-1-5p to HOTAIRM1 was predicted using lncRNAMap (http://lncRNAMap.mbc.nctu.edu.tw/) or TargetScan 7.2 (http://www.targetscan.org/), respectively. Luciferase plasmid containing wild-type (pmirGLO-HOTAIRM1-WT) putative miR-29b-1-5p binding sites in the HOTAIRM1 sequence was generated. To detect binding between HOTAIRM1 and miR-29b-1-5p, pmirGLO-HOTAIRM1-WT reporter plasmid was co-transfected with miR‐NC or miR-29b-1-5p mimics into HEK-293T cells using the Lipofectamine 3000 reagent (Thermo Fisher Scientific). After transfection for 48 h, the luciferase activity was evaluated through the luciferase reporter assay kit (Promega, Madison, WI, USA) according to the manufacturer's protocol. Renilla luciferase activity was used as a control. 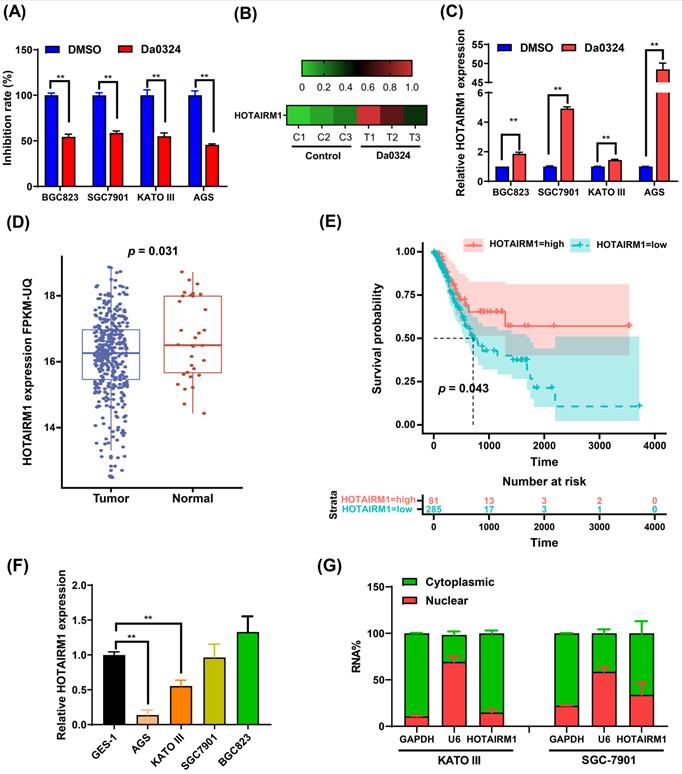 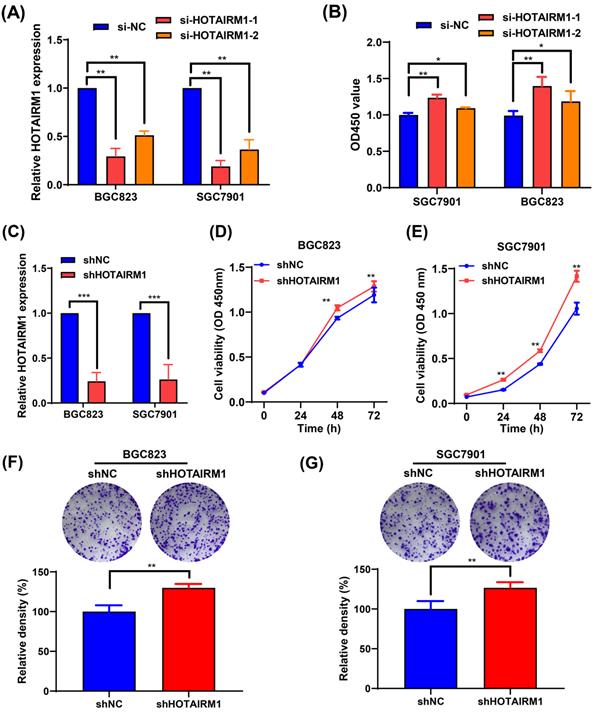 We used HOTAIRM1-silenced BGC823 and SGC7901 cells to investigate the biological function of HOTAIRM1 in Da0324-induced cytotoxicity in vitro. As shown in Figure 4A and 4B, the results of CCK-8 assays showed that Da0324 treatment significantly reduced GC cell viability and the knockdown of HOTAIRM1 partially reversed the growth inhibition induced by Da0324. In addition, a similar pattern was observed in the plate colony formation assays (Figure 4C). 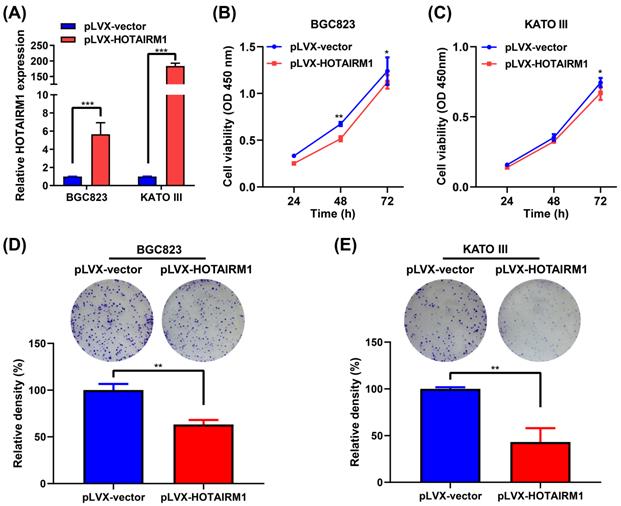 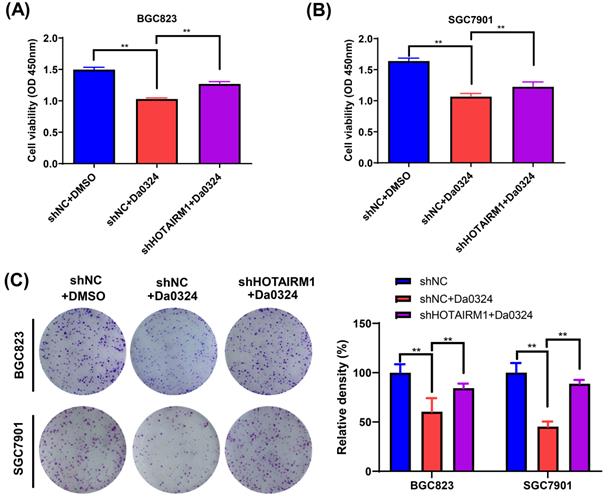 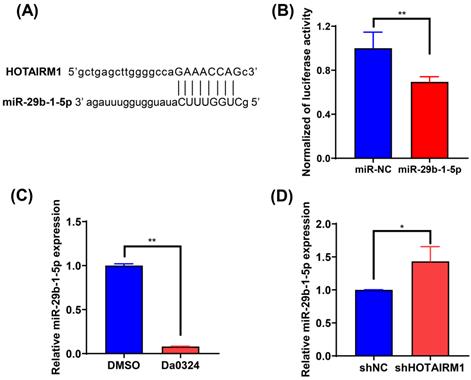 Interest in the use of natural compounds such as curcumin to treat cancer has increased. More and more research on curcumin has shown that it exerts anti-tumor effects by regulating various biological molecules such as cytokines, adhesion molecules, growth factors, and their receptors [31]. Experimental studies with curcumin have shown that it can inhibit tumor initiation, proliferation, metastasis and invasion of GC cells [32]. For example, curcumin inhibits proliferation and induces autophagy and apoptosis in GC cells by activating the P53 signaling pathway and inhibiting the PI3K signaling pathway [33]. The poor bioavailability and pharmacological kinetics of curcumin hinder its therapeutic potential. In our previous studies, to improve the above shortcomings, we have developed novel analogs of curcumin Da0324, which showed significantly improved stability and anti-cancer activity in GC cells [2, 20]. In this study, we further searched for the possible mechanisms that could provide new ideas to support its intriguing anti-cancer activity.

As potential anti-carcinogens, curcumin and its analogues have been explored for their potential to regulate lncRNAs [34]. For example, curcumin treats gliomas by regulating the negative feedback loop of H19/miR-675/VDR [35]. Furthermore, Yoshida et al. observed that curcumin reduced the resistance of pancreatic cancer cells to gemcitabine by inhibiting the expression of lncRNA PVT1 [36]. Here, we identified all statistically altered lncRNAs in GC cells induced by Da0324 with high-throughput sequencing. In particular, we found that HOTAIRM1 was up-regulated in GC cells by Da0324 treatment. HOTAIRM1 is specifically expressed in the myeloid lineage, and was initially identified as a myeloid-specific regulator of the HOXA gene family [37]. Recent studies have shown that the function of HOTAIRM1 is different in different types of cancer. In leukemia [38], glioblastoma [39, 40], non-small cell lung cancer [41, 42] and thyroid cancer [43], the expression of HOTAIRM1 is upregulated and it functions as an oncogene. However, HOTAIRM1 is downregulated in the hepatocellular carcinoma [40], colorectal cancer [44, 45], ovarian cancer [46] and GC [28], and is absolutely a suppressor factor. Hai Hu et al reported that HOTAIRM1 inhibits cell progression by regulating miR-17-5p/PTEN axis in GC which is consistent with our results [28]. The reason why HOTAIRM1 acts as a promoter or suppressor in opposite ways in different cancer is still unclear. However, it is not an occasional event. Many human genes have been found to be altered in very tissue-specific ways during tumorigenesis [47]. Different tissues have a completely different microenvironment. Cancer cells are facing the different external pressures that cause proliferation regulators to exert selective functions [47]. Here, we found that HOTAIRM1 transcription was activated by Da0324 in GC cells, suggesting that the anti-tumor effects of Da0324 might be caused by the up-regulation of HOTAIRM1. Our study showed that HOTAIRM1 silencing promoted GC cell proliferation whereas overexpression of HOTAIRM1 inhibited GC cell proliferation as detected by CCK-8 and colony formation assays. These results indicate that upregulation of HOTAIRM1 can inhibit the development of GC, which is consistent with the findings of Lu et al. [28]. Moreover, functional assays showed that knockdown of HOTAIRM1 could attenuate the inhibitory effect of Da0324 on GC cell proliferation in vitro, suggesting that Da0324 exerts its anti-cancer effect at least in part via upregulation of HOTAIRM1. 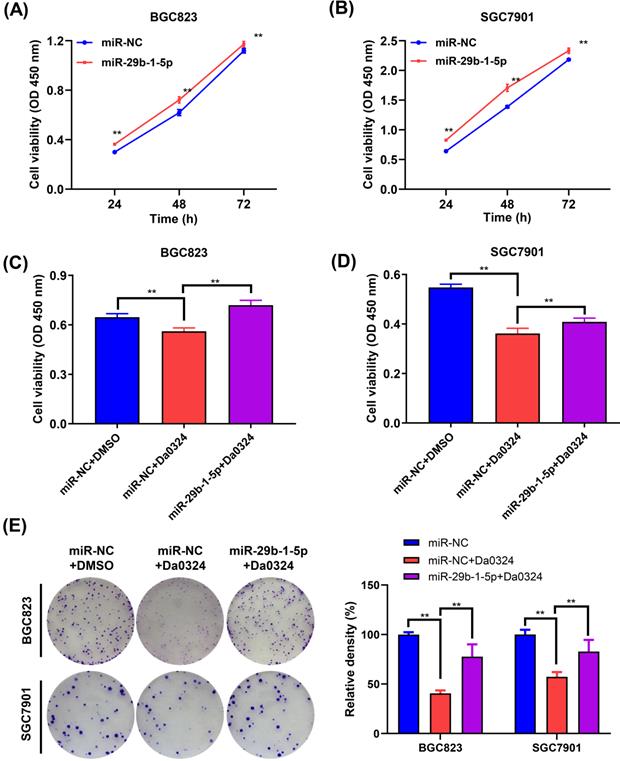 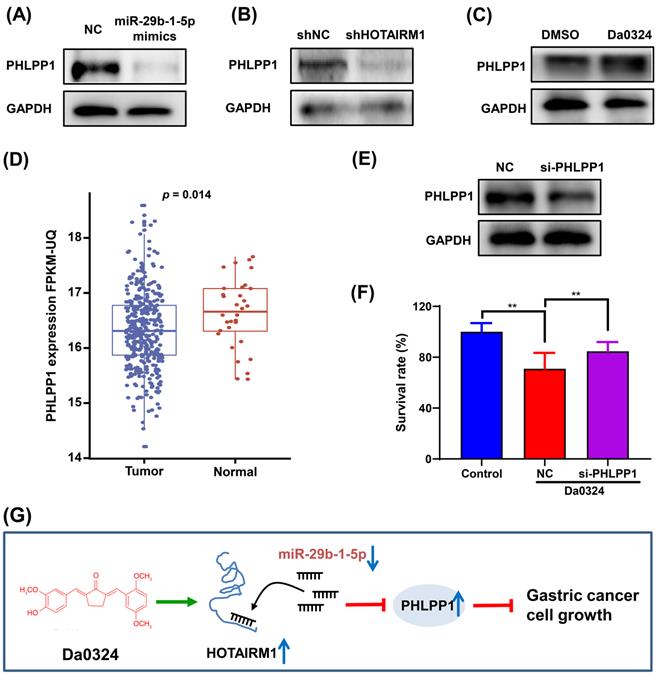 PHLPP1 has been reported to be a direct target of miR-29b-1-5p [30]. Knockdown of miR-29b-1-5p inhibited the migration of AGS cells, knockdown of PHLPP1 increased migration rates in Helicobacter pylori-treated AGS cells [30]. Several research studies have shown that decreased or lost PHLPP1 expression has been detected in many cancers, such as prostate cancer, colorectal cancer, pancreatic cancer and glioblastoma [51-54]. The low expression of PHLPP1 has been related to GC [55]. In this study, we found that overexpression of miR-29b-1-5p or knockdown of HOTAIRM1 decreased the expression of PHLPP1, while Da0324 treatment increased the expression of PHLPP1 in GC cells. Knockdown of PHLPP1 significantly reversed the effect of Da0324 on GC cell growth inhibition, suggesting that the efficacy of Da0324 is partially dependent on increasing the level of PHLPP1. Taken together, these results suggest that the mechanism of anti-cell proliferation induced by Da0324 is achieved by regulating the HOTAIRM1/miR-29b-1-5p/PHLPP1 axis. Overall, our study elucidated a novel molecular mechanism of the anti-cancer activity of Da0324 in GC cells. HOTAIRM1 transcription was activated by Da0324 treatment in GC cells. Subsequently, HOTAIRM1 inhibited GC cell growth through promoting PHLPP1 expression by sponging miR-29b-1-5p. These data provide new insights into understanding the biological function and downstream regulatory network of Da0324.

The current research was funded by the Zhejiang Provincial Natural Science Foundation of China [No. LY19H160025] and Medicine and Health Science and Technology Program of Zhejiang Province [No. 2020KY635].

This study was approved by the Ethics Committee of the First Affiliated Hospital of Wenzhou Medical University.

The datasets used and/or analyzed during the current study are available from the corresponding author on reasonable request.