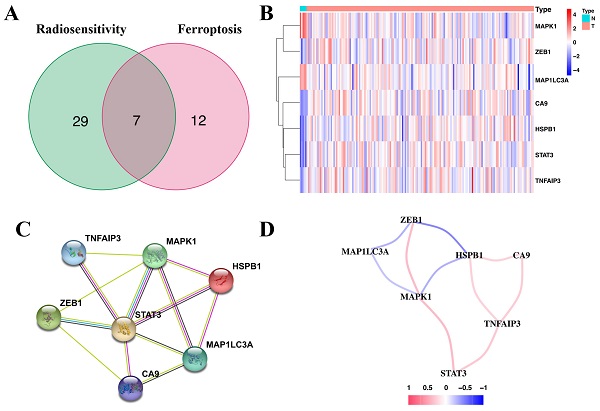 Background: Gliomas are the most refractory intracranial disease characterized by high incidence and mortality rates. Therefore, radiotherapy plays a crucial role in the treatment of gliomas. However, recent evidence reveals that ferroptosis is highly associated with radiosensitivity in tumor cells. Therefore, this study aimed to investigate radiosensitivity- and ferroptosis-associated biomarkers. Moreover, the study aimed to provide new strategies for the treatment and evaluation of prognosis in gliomas.

Methods: The mRNA sequencing and relevant clinical data were obtained from The Cancer Genome Atlas (TCGA). Secondly, differential analysis was conducted to reveal the radiosensitivity- and ferroptosis-associated differentially expressed genes (DEGs). Further, a predictive model based on the seven genes was constructed, and LASSO regression analysis was carried out. After that, the Chinese Glioma Genome Atlas (CGGA) was used for validation of the results.

Results: A total of 36 radiosensitivity- and 19 ferroptosis-associated DEGs with a prognostic value were identified. Moreover, seven intersecting genes (HSPB1, STAT3, CA9, MAP1LC3A, MAPK1, ZEB1, and TNFAIP3) were identified as the risk signature genes. The ROC curves and K-M analysis revealed that the signature genes showed a good survival prediction. Furthermore, the functional analysis revealed that the differentially expressed genes between the high-risk and the low-risk groups were enriched in glioma-related biological processes. In addition, differences were reported in immune function status between the two groups.

Conclusion: This study revealed that the seven biomarkers could help predict the prognosis in glioma patients. In addition, this study provides a basis for understanding the molecular mechanisms of radiosensitivity and ferroptosis in the treatment of gliomas.