Background: miR-143 is known to be downregulated in various cancer cells and tumors and generally plays a tumor-suppressor role. miR-143. However, the role of miR-143 in the mediation of the sensitivity of prostate cancer cells to abiraterone acetate remains unrevealed.

microRNAs (miRNAs) are known to play critical roles in almost all biological processes, such as cell growth, migration and invasion, metabolism, apoptosis, and differentiation [9]. miRNAs generally downregulate target gene expression by binding to its mRNA and suppressing mRNA translation. miRNAs are reported to participate in the initiation, development, and progression of various types of tumors [10]. MiRNAs can also be recognized as oncogenes or tumor suppressor genes based on their primary targets and biological functions. Dysregulation of miRNA profiles has been identified in all types of human cancers, and the utility of miRNAs in cancer diagnosis, progression, and response to treatments is gaining increasing attention [11,12].

In recent years, many miRNAs have been found to be involved in mediating the response of cancer cells to chemotherapeutic drugs [13]. For instance, upregulation of miR-21 promotes doxorubicin/adriamycin (DOX)-resistance through targeting phosphatase and tensin homolog (PTEN) in breast cancer cells [14]. MiR-200 family were reported to be involved in regulating taxanes sensitivity in ovarian cancer cells. In addition, downregulated miR-148a was identified to be responsible for enhanced paclitaxel resistance in hormone-refractory prostate cancer cells (PC3 and DU145) [15]. A better comprehension of miRNAs in cancer drug response will enable the intervention of new therapeutic miRNA-related methods for prostate cancer patients [16].

Protein samples were loaded on an 8% precast protein gels, and separated by SDS-PAGE. Subsequently, the separated proteins on the gel were transferred onto a polyvinylidene difluoride membrane. After blocked using a blocking buffer, the membrane was immersed in blocking buffer containing primary antibodies overnight. After incubation with secondary antibodies, the membrane was soaked in enhanced chemiluminescence. The protein signals were captured by a BioRad imaging system (ChemiDoc XRS+). GAPDH was used as a control for normalization. Antibodies against p-Bcl-2, Bcl-2, p-JNK, JNK, and GAPDH were purchased from Abcam (Pudong New District, Shanghai, China).

PC3-AbiR-miR-143 and PC3-AbiR-miR-control were treated with or without abiraterone acetate for 48 hours. Cells were stained with Annexin V labeled with CF Blue and propidium iodide (PI, Sigma, St. Louis, MO, USA). After incubated in the dark room for 15 mins, cells were washed twice with cold phosphate-buffered saline (PBS). Apoptotic cell population was assess using BD Accuri™ C6 Plus Flow Cytometer.

Male BALB/c nude mice were purchased from the Vital River Laboratory Animal Technology Co. Ltd. (Beijing, China). 2×106 PC3-AbiR-miR-143 or PC3-AbiR-miR-control cells were mixed with Matrigel (BD, USA) and 100 μl tumor cell mixture were subcutaneously inoculated into the flanks of each mouse. After the tumor volume reached 50-100 mm3, PC3-AbiR-miR-143 or PC3-AbiR-miR-control tumor bearing mice were received oral administration of vehicle or abiraterone acetate (200 mg/kg). Tumor volume was measured at three days interval by formulation of Volume=1/2×length×width2. Mice were sacrificed 21 days post-tumor implantation. Tumor tissue from each mouse was collected and weighted. This study was performed in strict accordance with the NIH guidelines for the care and use of laboratory animals (NIH Publication No. 85-23 Rev. 1985). The animal experiment protocol has been approved by Ethics Committee of the LONGHUA Hospital Shanghai University of Traditional Chinese Medicine.

Tumor tissue sections were sequentially undergoing dewaxing, rehydration, and H2O2 treatment. Antigen retrieval was performed by immersing tissue sections in a container with antigen retrieval buffer (Tris/EDTA pH 9.0, sodium citrate pH 6.0) and boiling the container in a pressure cooker for 3 mins at its full pressure. After that, the tissue sections were covered with blocking buffer for 60 mins at room temperature, followed by incubation with Anti-Ki67 antibody [SP6] (ab16667, Abcam) overnight in cold room. Tissue sections were washed and incubated with secondary antibody. The slides were developed using the diaminobenzidine substrate kit following manufacture's instruction.

All data are presented as means ± standard deviation (SD). Dots in the plot figures represent the biological replicates. Difference was assessed by Student's t-test between two groups, ANOVA analysis with a post hoc test between multiple groups. P value less than 0.5 was considered as statistically significant.

To explore which miRNA might be involved in the regulation of abiraterone acetate sensitivity in PC3 cells, a miRNA microarray assay including 25 miRNAs was performed on PC3 and PC3-AbiR cells. As depicted in Figure 1b, among all analyzed 25 miRNAs, miR-143 was the most significantly downregulated miRNAs in PC3-AbiR cells compared to PC3 cells (Figure 1c). Downregulation of miR-143 in PC3-AbiR cells was further confirmed by RT-qPCR (Figure 1b). Thus, miR-143 was chosen for further analysis.

JNK is a potential target of miR-143

To identify the potential target of miR-143, we found a sequence located in 3'UTR of JNK contains the binding site of miR-143, implying JNK might be a potential target of miR-143 (Figure 3a). To prove this hypothesis, a DNA sequence of 3'UTR of JNK containing either wild-type (JNK-WT) or mutant (JNK-MUT) miR-143 binding site was cloned into the dual-luciferase reporter plasmid. Subsequently, the plasmid (JNK-WT or JNK-MUT) was co-transfected with miR-Control or miR-143 into PC3 cells. The luciferase activity was measured 48 hours after transfection. As showed in Figure 3b, overexpression of miR-143 specifically suppressed the luciferase activity of the plasmid containing the wild-type, but not mutant, miR-143 binding site in the 3'UTR of JNK (Figure 3b). This evidence suggested that JUK is a direct target of miR-143. 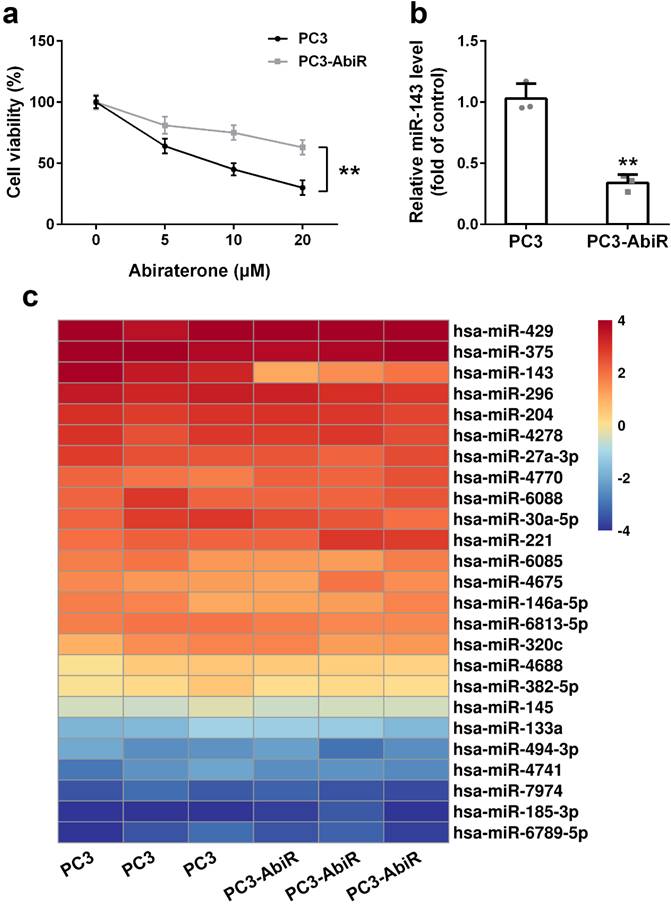 The target gene of miR-143 were predicted and validated. (a) The binding sites of miR-143 and JNK 3'UTR were predicted by the website Target Scan. (b) Dual-luciferase reporter assays were performed in PC3 cells. Data were presented as mean±SD. n=3. Student's t test was used to evaluate the statistical significance. **p< 0.01 compared with control group. 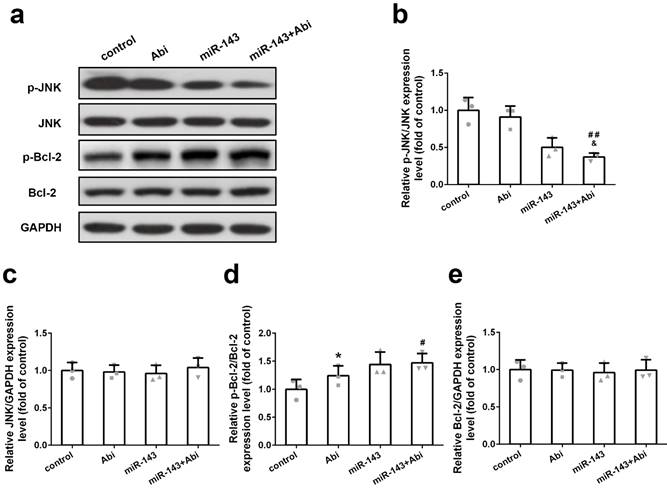 miR‐143 enhanced abiraterone acetate treatment in mice. The volume (a) and weight (b) of subcutaneous xenografts in each group were analyzed. The body weight (c) and survival rate (d) of mice were recorded. Data were presented as mean±SD. n=5 for each group. One-way ANOVA followed by Tukey post-hoc test was used to evaluate the statistical significance for panel b, and two-way ANOVA followed by Bonferroni post hoc test for panels a and c. *p< 0.05, **p< 0.01 compared with control group; ##p<0.01 compared with miR-143 mimics group; &p<0.05 compared with Abi group. 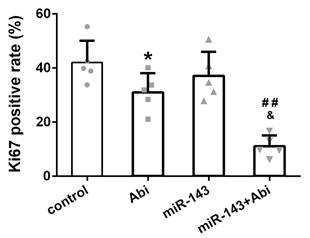 Numerous studies have proved that miR-143 is a universal anti-oncomiR [17]. Downregulation of miR-143 was described in various cancer cell lines and tumor tissues, including prostate, breast, gastric, ovarian, colon, bladder, and liver cancer, neuroblastoma, renal cell carcinoma, and osteosarcoma [18,19]. Decreased miR-143 levels are also correlated with the presence of metastases in many human cancers, such as prostate, breast, and cervical cancer, glioma, and hepatocellular carcinoma [17,19]. Furthermore, lower expression levels of miR-143 are reported to be correlated with poorer prognosis and shorter overall survival rate in multiple types of cancer patients [19,20].

To explore the underlying molecular mechanism, we identified JNK as a direct target of miR-143 by using luciferase report assay and Western blot assay. Of note, Bcl-2 has been confirmed as a direct target of miR-143 in colon, ovarian, bladder, and cervical cancer [24-26]. In contrast, miR-143 had no effect on Bcl-2 expression in PC3-AbiR cells. Although miRNAs that regulate target gene expression might be cellular- or tissue-specific, the reason why miR-143 cannot regulate JNK and Bcl-2 expression in PC3-AbiR cells remains elusive.

Importantly, we found that overexpression of miR-143 decreased p-JNK levels and enhanced p-Bcl-2 levels. The detailed mechanism requires further investigation. Because KRAS and AKT are two direct targets of miR-143 in multiple cancers, and KRAS and AKT are the upstream regulators of JNK/Bcl-2 signaling pathway [19,27]. We hypothesized that miR-143 might mediate JNK/Bcl-2 signaling pathway through targeting KRAS and/or AKT in PC3-AbiR. Further studies are needed to prove this hypothesis.

8. Thakur A, Roy A, Ghosh A, Chhabra M, Banerjee S. Abiraterone acetate in the treatment of prostate cancer. Biomedicine and Pharmacotherapy. 2018;101:211-8