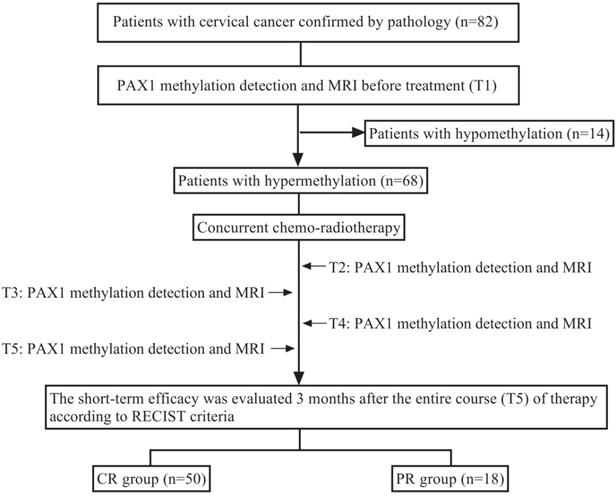 Methods: This study enrolled 82 cervical cancer patients from August 2018 to August 2020. We compared the clinical results between different PAX1 methylation status. Hyper-methylation patients were subjects to MRI and quantitative methylation-specific PCR (QMSP) for PAX1 before, in the middle, immediately after, 1 month and 3 months after CCRT. The changes in PAX1 methylation during CCRT were analyzed.

Results: The lower PAX1 methylation status were related to a poor tumor response. Based on the MRI findings three months post-treatment, the hypermethylated patients were classified into the complete response (CR; n=50) and partial remission (PR; n=18) groups. The average PAX1 △Cp value of CR and PR groups before radiotherapy was 5.08±1.98 and 4.32±2.00 respectively, and after concurrent chemo-radiotherapy was significantly increased to 17.35±4.96 and 16.99±6.17, respectively (P<0.05). Furthermore, the PAX1 △Cp value between CR and PR groups were significantly different at mid-treatment and performed well in predicting short-term efficacy (AUC 0.84) in this period, and its sensitivity and specificity for predicting PR were 0.72 and 0.88, respectively.

Conclusion: The PAX1 methylation level may predict the sensitivity and efficacy of CCRT in cervical cancer.