Colorectal cancer (CRC) is one of the commonly diagnosed cancers and a leading cause of cancer-related death throughout the world [1]. Chinese patients account for nearly one tenth of the global CRC burden [2]. Both CRC incidence and death have significantly increased in the past two decades in China, in parallel with rapid economic growth, and continue to rise [2]. In comparing with developed countries, Chinese CRC patients have a poorer prognosis as 50-75% patients are initially diagnosed with stage III-IV diseases [3]. Indeed, CRC is emerging as a major healthcare challenge in China.

In addition to the sequential therapeutic schedule of offering maintenance therapy and reintroduction of chemotherapy regimens to patients with nonresectable mCRC [13-15], multiline treatment strategy of continuing bevacizumab after progression to first-line bevacizumab plus chemotherapy demonstrated optimal clinical benefits in prolonging progression-free survival (PFS) and overall survival (OS) in mCRC patients [7, 16, 17]. In lieu of this, continuing cetuximab after progression to first-line cetuximab may also be promising. The underlying hypothesis is that a sustained inhibition of EGFR signaling with cetuximab would continuously eliminate sensitive clones of RAS wild-type tumor [18]. In addition to RAS mutation, other resistant mechanism of mCRC to anti-EGFR antibodies includes the aberrant VEGF signaling [19], i.e., a higher tumor VEGF expression is associated with worse overall survival in mCRC patients treated with anti-EGFR antibodies [20]. In considering that VEGF is continuously expressed throughout tumor progression in facilitating tumor angiogenesis [21], an interesting question thus emerges: for patients that fail to the cetuximab-based first-line combination treatment, which is an optimal choice of further-line treatment: cetuximab continuation? Or switch to bevacizumab?

This randomized phase 2 trial compared standard chemotherapy combined with either cetuximab or bevacizumab in mCRC patients with wild-type KRAS, NRAS and BRAF V600E tumors that had progressed after cetuximab first-line regimen.

One hundred and thirty-eight sporadic colorectal cancers patients were evaluated for enrollment in this trial from Oct 1, 2016 through July 1, 2020 in 3 hospitals in Henan Province of China. Inclusion criteria included ≥18 years old; confirmed as adenocarcinoma of the colon or rectum with measurable metastasis; the second biopsy confirmed as KRAS (exon 2, 3, 4), NRAS (exon 2, 3, 4) and BRAF V600E wild-type; Eastern Cooperative Oncology Group (ECOG) performance status 0-1; documented progressive disease (PD) during or after first-line treatment with cetuximab plus standard chemotherapy; normal organ and bone marrow function. This trial was approved by the ethics committee of Henan Cancer Hospital (IRB#2016ct084). Written informed consent were obtained from all patients.

This trial was an open-label and 1:1 randomized phase 2 trial in assessing 2 standard regimens: cetuximab or bevacizumab, combined with FOLFOX or FOLFIRI chemotherapy after failed to first-line treatment containing cetuximab. FOLFOX or FOLFIRI crossover was adopted. Cetuximab 500mg/m2 per 2 weeks (arm A) or bevacizumab 2.5 mg/kg per week equivalent (arm B), was administered with FOLFOX or FOLFIRI until disease progression, occurrence of unacceptable toxic effects, or patient's refusal. Randomization was stratified by first-line chemotherapy, PFS with the first-line therapy (≤9 months vs >9 months), and the center.

The primary end point was progression free survival (PFS), defined as the time from randomization to disease progression or death from any cause whichever occurred earlier. Secondary objectives were median overall survival (OS), objective response rates (ORRs) measured by RECIST 1.1, and safety by Common Terminology Criteria for Adverse Events, version 4.03. Tumor response was evaluated at baseline and every 6 weeks until disease progression. Follow-ups were conducted every 3 months for treatment related serious adverse effects (AEs); subsequent anti-cancer therapy; and survival time.

Tumor biopsy tissues from all enrolled patients, of which 22 had a paired normal mucosa sample taken 5 cm from the primary tumor, were snap-frozen and stored in liquid nitrogen until DNA and RNA extraction. QIAamp DNA Mini Kit and RNeasy Mini Kit (Qiagen) were used for extracting DNA and RNA, respectively. Gene mutations were examined using KRAS/BRAF Mutation Analysis Panel Kit and NRAS Mutation Analysis Kit (KRAS exons 2, 3, 4 and BRAF V600E, NRAS exons 2, 3, and 4; EntroGen). These analyses, approved for in vitro diagnosis, use allele-specific PCR probes to identify 18 mutations of KRAS, 11 mutations of NRAS, and BRAF V600E mutations, with detection limit <1%. mRNA expressions of VEGFA, ERBB2 and MET were examined by real time RT-PCR using primers as below: sense CCATCCTGTGTGCCCCTGAT and anti-sense GCTGGCCTTGGTGAGGTTTG for VEGFA; sense TGGAACACAGCGGTGTGAGAA and anti-sense TTGCAGCCAGCAAACTCCTG for ERBB2; sense TGTGCATGAAGCAGGAAGGAACT and anti-sense AGCTGTTGCAGGGAAGGAGTG for MET. GAPDH served as an internal control for the real time RT-PCR analysis.

A modified intention-to-treat (mITT) analysis for the primary end point was performed, including all enrolled patients who received at least 1 dose of study drug. Sample size calculation for PFS was performed using a two-tail test in PASS 2020. The sample size obtained, using an alpha risk of 0.05, a beta risk of 0.30, the Control Group PFS of 4.5 months and the Experimental Group PFS of 7.5 months with none follow-up loss, was 51 subjects per group in each arm. PFS and OS (with their 95% CIs) were summarized using the Kaplan-Meier method. Log-rank test was used to evaluate treatment efficacy and to account for the 3 stratification factors. Hazard ratios (HRs) and the 95% CIs were determined using Cox proportional hazards regression models. ORR was analyzed using a Fisher exact test between the 2 arms; ORR estimates and 95% Wilson CIs were presented. Analyses were performed using SAS version 9.4 (SAS Institute Inc).

From Oct 1, 2016 through July 1, 2020, 104 out of 138 evaluated patients were enrolled at 3 cancer centers in Henan province of China as the mITT population (Figure 1). Patient characteristics and the use of chemotherapy were distributed similarly in each arm (Table 1). In the study, 49 patients who received the FOLFIRI regimen in first-line switched to the FOLFOX regimen and vice versa for 55 patients from FOLFOX regimen in first-line to the FOLFIRI regimen. Tumor biopsies were examined as wild-type KRAS (exon 2, 3, 4), NRAS (exon 2, 3, 4) and BRAF V600E for all patients included in this study.

Demographic and clinical characteristics of patients at baseline 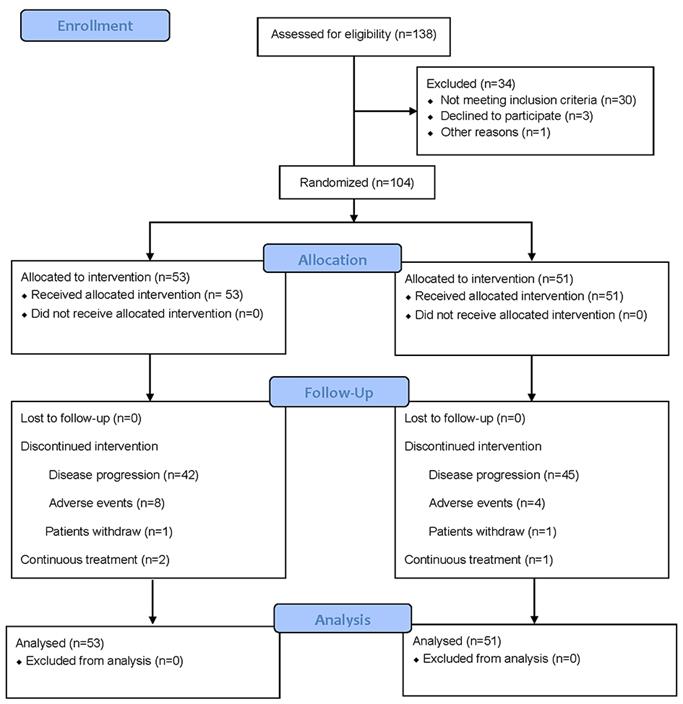 Multivariable analysis of factors contributed to the patients' overall survival 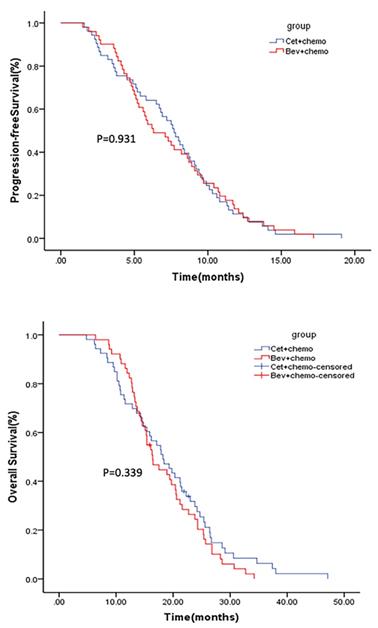 This is a novel trial in evaluating the clinical benefits of continuing EGFR inhibition versus VEGF inhibition in treating wild-type KRAS, NRAS and BRAF V600E mCRC tumors with second-line cetuximab or bevacizumab plus chemotherapy crossover after tumor progression to first-line cetuximab regimen. From the results on the 104 ITT cohort, no statistical difference in PFS, OS and ORR were observed among the two arms. However, the better numerical values of all the end points seem favor the cetuximab continuation plus chemotherapy crossover.

Previous trials have shown clinically therapeutic benefits in continuing cetuximab (the CAPRI-GOIM trial) [22] or continuing anti-angiogenic drug (the ML18147 and RAISE trials) [16, 23] after first progression than chemotherapy alone in mCRC. The recent PRODIGE18 trial [7] suggested a favorable efficacy of continuation with bevacizumab vesus switching to cetuximab plus chemotherapy after first progression in mCRC patients. Together with the current study that cetuximab continuation plus chemotherapy after first progression had favorable PFS, OS and ORR than switching to bevacizumab, these results indicate that the choice of first-line targeted therapy is relevant for further course of disease [24]. In the FIRE-3/AIO KRK0306 trial [25] in which subsequent-line therapy was evaluated that was not part of the previous regimen in KRAS wild-type mCRC, first-line application of anti-EGFR targeted therapy seems optimal for effective subsequent therapy including anti-angiogenic agents.

In our study, although we examined an increased expression of VEGFA in the cetuximab-progressed KRAS, NRAS and BRAF V600E wild-type mCRC tumors, our study didn't find clinical advantage of the anti-VEGF agent bevacizumab in conferring improved PFS and OS versus cetuximab continuation. This provides first and important clinical evidence that cetuximab treatment in first and second line in combination with crossover chemotherapy could be an effective option in comparable to cetuximab in first and bevacizumab as second line treatment, for patients with wild-type KRAS/NRAS/BRAF tumors. Overall, our data also suggest that mutation classification for the EGFR downstream KRAS/NRAS/BRAF genes would identify EGFR-dependent tumors that are highly possible in responding to anti-EGFR treatment beyond progression.

Potential mechanisms of CRC cells become resistant to anti-EGFR therapy have been extensively investigated, particularly the activation of growth factor receptors MET and ERBB2 [26]. In the present study, 22 paired tumor and non-tumor normal tissue were examined for mRNA expressions of MET and ERBB2. MET mRNA showed a 3-fold increase in the tumor vs non-tumor normal tissue (3.02±2.16), while the expression of ERBB2 seems no change (0.93±0.69). Although MET was highly expressed in the cetuximab-progressed tumors, treatment responsiveness to cetuximab or bevacizumab in each arm was not correlated with the MET expression level, indicating that a MET-dependent tumor cell population may exist. Bardelli et al [27] reported the presence of rare MET-amplified tumor cells in some CRC patients before treatment with cetuximab, and cetuximab therapy acted as a selective pressure to expand this minor tumor cell population. Furthermore, interception of MET signaling could largely impair tumor growth in MET-amplified CRC [27]. Together with these findings, our study may indicate that MET inhibitors in combination with cetuximab continuation could serve as a novel therapeutic opportunity to the patient population in our current study setting.

mRNA expressions of VEGFA, ERBB2 and MET in cancerous vs non-cancer normal tissue (ratio of cancer/non cancer) in each treatment arm and patients with PD or PR responsiveness. 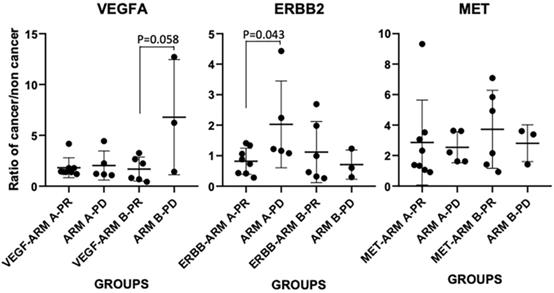 We are aware of the small sample size of the clinical study, especially the limited number of paired tissue specimens for the VEGFA, ERBB2 and MET mRNA examination in correlating to treatment response, thus larger cohort study is warranted. In addition, animal study in exploring the combination of EGFR inhibitor with MET inhibitor on EGFR treatment progressed CRC tumors may provide translational relevance.

The authors would thank Chengjuan Zhang for her contribution to the specimen collection; Yangyang Huang for her efforts in statistical analysis; and thank all patients and their families for the participation.

This study was supported by the Key projects of Science and Technology of Henan Province (201701033).

This study was approved by the ethics committee of Henan Cancer Hospital (IRB#2016ct084). Written informed consent were obtained from all patients. All methods were carried out according to the World Medical Association Declaration of Helsinki.

This trial is retrospectively registered at ClinicalTrials.gov NCT04718038.